I Live In The UK And I'm Afraid Trump Might Win

You know the future is particularly bleak when you, a 17 year old boy from the UK, is terrified of the possibility that one man 3,656 miles away may become President, the one and only: Mr Donald Trump. The butt of many a joke, Mr Trump is a somewhat… controversial character to say the least but, regardless of how ever many thousands he’s offended (a figure that steadily climbs daily it seems) has won 743 of the required 1237 delegates to win as of the 13th April 2016. How? How has one man offended so many yet still managed to dance through the metaphorical daisies of the Presidential campaign? Then, his latest nail to his seemingly bullet proof coffin came to mind; his pro-life stance on abortion made me question: what would life be like with the toupee’d terror behind the desk of the Oval Office?

As aforementioned, first under fire in a Trump regime are women, and I’m sorry to say this but yes, our dear friend Donald is pro-life. Meaning you may face a criminal penalty for having an abortion. I know, family planning would be a felony. In an interview on MSNBC, Trump stated that, “there has to be some form of punishment” for receiving an abortion and this is, frankly, terrifying to me, the thousands of women who once considered voting for Trump, and, I should imagine, the majority of women in the US, with Trump’s America restricting and punishing what many people see to be a basic right: the right to their bodies and how they choose to use them.

Next up, good luck if you’re POC because, under Mr Trump, things may be dire. We’ve all heard Mr Trump’s views on Mexico-American immigration, arguing that, “[Mexico] are not sending their best,” claiming that they are “bringing drugs. They’re bringing crime. They’re rapists.” A statement which it’s fair to say almost all of us do not agree with. At all. Mr Trump went as far to suggest the building of a wall to prevent the movement of people into the US from Mexico, an idea which (to me as a European where you can, given good enough reasoning, pootle your way from Spain to Norway) is absurd, why be so guarded towards a populous which makes up 10.9% (34.6 million people) of your own population? I may be wrong but, from an outside perspective, a man so hell-bent on being so ignorantly racist definitely doesn’t deserve even a day in the White House.

Finally, to those of you who are Muslim, part of my heart is happy for you because, with Donald at the desk, you’ll have a tough time getting to the “Land of the Free” after Trump’s comments on how, “Islam hates us,” a comment he made to CNN, going on to suggest the barring of Muslims from entering the country, shortly after the Paris attacks that took place in December of 2015. This only proves how ignorant Mr Trump is, suggesting that 1.6 billion Muslims across the globe hate America, whereas, Donald, it’s not the US they hate, it’s just you.

To conclude, although not a definitive guide to the possibly fateful future we may face under the debatably demonic Donald, I hope this has offered some form of aid in conveying why someone, anyone, must stump the Trump. 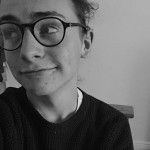 Seventeen-year-old Joe Roberts from Oxford, UK, has always had an avid passion for reading and writing, finding especial interest in social and political writing, and more niche, obscure articles such as those which frequent VICE magazine, taking special interest in investigative journalism. He is not afraid to speak his mind, as well as for those he's close to and hopes to act as a voice for all.