Tupac's Back to Call Out Trump

MTV News has dug up an unreleased interview with Tupac Shakur from 1992, where the late rapper makes an insightful evaluation of the culture of greed and materialism – shown through none other than Republican frontrunner Donald Trump.

MTV News captured Shakur criticizing cooperate leaders and greedy people for usurping American values of responsibility and compassions in favor of the pursuit of wealth.

The interview was about more than Trump – who, in 1992, was just another symbol of self- importance (as he still is today). The actual focus of the conversation was the politics of social responsibility, where Tupac says he believes any American is self-made. “Everybody needs a little help on their way to being self-reliant,” he says. “Everybody needs a little something to become independent. No independent person just grew up and was born independent.”

Trump should recognize and identify with this idea, having built his whole empire on a “small loan” of $1 million from his father. Shakur emphasizes that people need to call out Trump and others to make sure  they don’t forget they have a responsibility to society, even when they acquire their profits.

“We’re got too much money here,” Tupac adds. “Nobody should be hitting the Lotto for $36 million while we’ve got people starving in the streets.”

In the video, Shakur explains that African-Americans would achieve more by holding rich people responsible for their actions than they would be by just blaming white people for every aspect of income inequality.

Tupac started many trends and he was even ahead of the new popular trend of #NeverTrump, iconic. 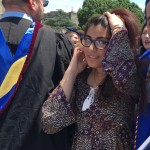