Too Light To Fit In, Too Dark To Be Accepted

I’m fully Hispanic, Mexican actually, but people still don’t see me as a Latina because of my very pale skin. Sorry I don’t meet your “Hispanic girl standards?” I’ve noticed that many people sort of determine your ethnicity because of your skin color and it’s insulting, there’s nothing worse than feeling like you don’t belong to your race because of how you look.

I’ve witnessed this multiple times at school; people talk about a certain black student and claim that they aren’t black because they’re light skinned, or that they aren’t black because they’re mixed or “whitewashed.” I hope they know that the way one acts has nothing to do with their ethnicity and that the way one looks doesn’t either. For the longest time Ive gotten plenty of shocked faces when I mentioned my ethnicity. But that isn’t all, Ive also gotten:

“Oh! But you look white, don’t worry it’s a compliment!”

“No… You’re white, I mean have you seen your skin color?”

Since when was looking like something other than my race a compliment? How must I embrace my culture when all I get is other people’s standards on my physical attributes?  It’s a shame that I’m not seen as who I am, and that other people have to go through this as well.  My skin color is not an advantage to the eyes of Caucasians, my skin color is just a different shade of who I am, my skin color will not tell you where I come from, and if it weren’t for the labels that have escalated over time then there would be more acceptance. No one can say that they’re proud to look like they belong to a different ethnic group.

It’s similar to people with darker skin where people are unaccepting because it once again doesn’t meet their standards. Or people tend to treat others differently because of that, and it’s all so ridiculous because we all can’t be respected on how we look! No one should be outed because of their differences and it all comes down to why we’re treated like we don’t belong. I know we’ll still have to stand up for ourselves and take pride in our nationality because informing people is very important, but is it necessary?

I came to the conclusion that its strongly necessary and here’s why.
When the word “race” was created it was to separate and label humans to identify them as something apart from white people. Ever since it has become so important to others on how we should be “categorized;” however, it should be done fairly especially when something so ridiculous was created in the first place. Our skin color shouldn’t reflect on how we’re treated, and it’s time to actually be respected for who we are.

In this article:acceptance, COLORISM, ethnic minority, RACE, racism, YOUTH
Up Next:

Black LGBT Are The Backbone of Black Liberation

The Ayesha Curry Effect: Stop Making Her The Standard For Black Women 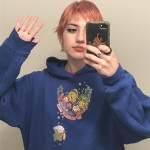 Andrea is a sixteen year old Hispanic girl who lives in California. She enjoys stealing her dads cassettes, educating herself through fashion magazines, ethnic studies, and watching old movies. She dances, makes short films with her friends, and goes to crappy free shows. You can follow her instagram @nervousteen