What You Should Know About Food

The food industry. It consists of livestock and agriculture, and is driven by/involves 5 central topics of interest: economic value, production speed or efficiency, health, environmental footprint, and morals or ethics. Nowadays, large corporations in the industry value 2 things: cheap production and labor, and time efficient mass production for products to be quickly distributed across the nation. It is often claimed that because the average amount of products in an American supermarket is somewhere between 40,000 and 50,000, that there is a diversity in the food available to the general public. However, almost all of these products are all owned by 10 parents companies, known as “the Big 10”, and contain many of the same ingredients such as corn syrup, soy, and chemicals that an average person probably can’t even pronounce (source). There are companies such as Monsanto that run nearly the entire agrochemical portion of the industry, and 4 companies that control over 80% of the meat that you consume (source). These large corporations valuing quantity over quality has led to a variety of detrimental impacts on the things we put in our bodies, the condition of the environment and natural resources, lack of industry regulations, and inhumane treatment of workers. There is also a labeling issue in the United States, with companies finding loopholes in labels such as “organic”, “free-range”, and “cage-free” so that they can package their products as appealing to conscious consumers without having to actually do the work (source).

According to the Center for Food Safety, 92% of corn in the U.S. is genetically engineered, and 75% of processed foods in supermarkets contain GMO’s. Now, not all GMO’s are necessarily harmful, but the majority of them do contain or have been injected with chemical hormones and fertilizers. In 1952, the FDA held 50,000 food inspections, as compared to only 9,000 during the past few years. It has been scientifically proven that eating sustainably is healthier both for the human body and for the environment (source). With ingredients such as corn syrup being found in most cheap products and fast food being easily available to low-income families, the obesity epidemic is still rampant in the United States and is driven by companies valuing quantity over quality.

Regarding the environmental impact of the food industry, livestock production itself is one of the largest contributors to global air and water pollution (source). 38% of our planet’s land is used for livestock production itself. An example of the industry having a negative impact on our planet’s natural resources would be that the waste and manure from livestock production farms or factories often flows into nearby water sources, contaminating the water and creating dangerous water pollution that damages the local ecosystems. This leads to loss of biodiversity. Also, cattle is one of the most abundant sources of global greenhouse gas and chemical emissions such as methane, hydrogen sulfide, ammonia, and carbon dioxide.

It is common knowledge that the food and agriculture industry treats its livestock incredibly inhumanely and unethically (sources such as books and documentaries that you can check out will mentioned in a bit), but something that many people don’t know, is that the workers are treated inhumanely as well, with many of them being undocumented immigrants (source). In 1996, the rate of repeated-trauma disorders such as PTSD at meat-packing plants was 27 times higher than the national rate for private industry as a whole, and almost six-and-a-half times the rate for all manufacturing jobs. Surprisingly, not much has changed since then except for a decrease in FDA or governmental regulations. According to the Centers for Disease Control and Prevention, “agriculture ranks among the most hazardous industries. Farmers are at high risk for fatal and nonfatal injuries, work-related lung diseases, noise-induced hearing loss, skin diseases, and certain cancers associated with chemical use and prolonged sun exposure. Farming is one of the few industries in which the families (who often share the work and live on the premises) are also at risk for injuries, illness, and death.” These workers work for low wages in harsh conditions with little to no worker’s rights/benefits, and often will get fired or sued for exposing the conditions of the corporations that they work for. Large corporations or parent companies will also buy out smaller local businesses and farms as well as take local farmers to court and fire lawsuits against them to reduce competition.

Now that you have all of this information about the food that you eat, you’re probably wondering, “What do I do with this?” or “How am I supposed to consume food ethically?”, or even “Where do I find more information and raise awareness?” Well, I have compiled a concise but hopefully helpful and informative list of ways that both the United States (or perhaps any other country that you are from) and you as an individual can become a more conscious consumer/contributor to the food industry:

Here are some great resources such as books and documentaries that you can check out yourself that have more in-depth information on the food industry, as well as other ways to be an ethical and conscious food consumer:

Remember, eating and shopping for food in a conscious manner will pay off in the long run, and you most definitely won’t regret it. Happy eating!

The Impact of Michael Jackson 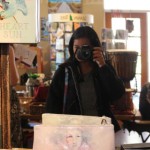 Jaskrit Bhalla is a young girl from Orange County, California with aspirations to change the world. She is passionate about writing, photography, civil/human and animal rights activism, environmentalism, politics, fashion, psychology, and community service. In her spare time, she plays with her two adorable puppers and binge watches sci-fi TV shows.