The UK Has a Female Prime Minister, but This Isn't a Feminist Victory

After all the turbulence in UK politics in recent weeks – the vote for Brexit, David Cameron’s resignation, the Labour party destroying itself from within – a leader has emerged calm, cool and collected in the face of the chaos, ready to lead Britain forward. Her name is Theresa May, and if you are unfamiliar with UK politics you could be forgiven for thinking that this is a step forward for women and for Britain. But Theresa May’s appointment as Conservative Party leader and Prime Minister is far from a feminist victory.

Indeed, it is far from even exhibiting any kind of social progress within the United Kingdom as a state and the parliamentary system as an institution. May is the 54th Prime Minister but only the second woman to hold the office. Progress is clearly excruciatingly slow, and while it is undeniable that for her entire career May has had to fight the male-dominated electoral system and ultimately emerged victorious, it is unlikely that her time in office will exhibit any radical progress for gender equality, within and without Parliament – or indeed, based on her political and voting history, any substantial progress at all.

May’s discouraging Parliamentary record exhibits deeply-rooted prejudices. While she claims she has since changed her views, she repeatedly voted against gay couples adopting children, and also for the restriction of IVF rights to couples where a male role model was present. Evidently, on LGBT issues, she has a rocky background and cannot be relied upon for any kind of progress in that area. In addition, despite claiming to be a feminist, May ignored all four parliamentary votes leading to the Gender Recognition Act. Gender equality has clearly never been at the forefront of May’s agenda, except perhaps as a cleverly manipulated tool to make herself seem like a more appealing and progressive candidate – but without ruffling any feathers by strongly advocating any real change.

Her time in office so far is similarly discouraging. While it has to be acknowledged that the Conservative party being in office is overall always going to be negative for minorities, the poor, and society’s most vulnerable, May’s Cabinet appointments demonstrate that the years of her government are likely to be particularly grim. Appointing Boris Johnson as Foreign Secretary is easily the most ridiculous and ill thought-out approach to positive international relations conceivable. The rest of May’s Cabinet does not bode well either. To consider the old adage that politics is ‘male, pale and stale’, May’s Cabinet does not do much to smash this tradition. There are only 8 females occupying the 25 Cabinet posts – admittedly an increase on David Cameron’s 6, but proportionate to the number of posts, not a dramatic one at all. And it is a depressingly pale Cabinet, with minorities absolutely staggeringly underrepresented. Considering that the government is supposed to represent the people, those holding the most highly ranked offices and the most power certainly do not.

Theresa May certainly isn’t politically radical, despite her defiance of the odds in becoming Conservative leader. You only have to look at her leadership campaign to see that she represents the ultimate in Conservative consistency – after all, that’s why she won the campaign. Those hoping that May’s premiership signals an advent of increased gender equality in Parliament are sure to be disappointed. May isn’t going to rock the boat in any way. The UK under the Conservatives is frankly still likely to be worse for women and minorities, and definitely worse for vulnerable members of society. And with the current lack of an effective opposition, as the Labour party succumbs to toxic infighting, politics in the United Kingdom paints a very dark picture indeed.

In this article:feminism, politics, theresa may, uk politics
Up Next:

Let’s End The Competition Between Women

Four Absurd Statements From Day 1 of the Republican National Convention 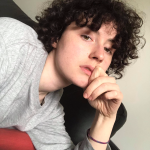 Amy Callaghan is an 19-year-old International Relations student from Scotland. She is particularly interested in include international social issues, politics, feminism and LGBT issues.