Back in May of 2014, then prep school senior, Owen Labrie, sexually assaulted a then freshman who attended the same school. The story grasped readers across the country as talk of rape culture became a hot topic. It started because of a tradition called “Senior Salute,” in which seniors try to have sex with freshman. Labrie and his group of friends were popular at the prep school with many girls willing to participate. He started by asking this freshman, who declined because she knew of the tradition. She then accepted based on a friend’s persuasion that he was being sincere in just wanting to see her. He then became aggressive and took advantage of her though, something she never wanted. She has remained anonymous the past two years, even while testified. He was only sentenced a year, but was released early after a measly two months in jail. Today though, after two years of hell, she is speaking out.

Chessy Prout, now 17, spoke to Savannah Guthrie in an interview televised this morning. The brave survivor recounted the ordeal, never knowing it would be turn into a high profile case.

Prout stated that as hard it was, she wouldn’t be where she is now without being able to speak out and tell her important story. She could only say that she hopes Labrie learns and gets help, so he doesn’t do this to someone else. She also spoke about how unfair it was that he was only charged with misdemeanors, not the more serious charge of felony sexual assault.

After the tough trial, Prout was adamant about returning back to the school as family members had previously attended the school too. She did notice that many of her old friends who were boys wouldn’t talk or look her in the eyes. Many joked about the assault and consent, which led her to leave and her family to to file a lawsuit against the school. In the civil suit, they said that St. Paul’s “meet its most basic obligation to protect the children entrusted to its care.” They said the school knew about this “Senior Salute” and did nothing to protect underclassman.

Above all, Prout says she wants to make sure that no one else feels ashamed or alone when going through a situation like this.

She’s now working with Promoting Awareness Victim Empowerment (PAVE) to “shatter the silence and prevent sexual violence through social advocacy, education and survivor support.” PAVE has also launched a new site, I Have The Right To, with the help of Prout.

With rape culture being so prevalent today, it’s important to have survivors like her come forward; to reiterate the message of “you are not alone” may seem repetitive, but for some, it’s life saving. Something is severely wrong when 1 out of 6 American women have been raped with 1 in 33 men experiencing it. The term sexual assault includes more than just rape as well. There is attempted rape, sexual coercion, sexual contact with a child, incest and fondling. Voyeurism, exhibitionism, sexual harassment or threats and forcing someone to pose for sexual pictures. Consent has to be a clear “yes” before any type of sexual activity can happen.

I hadn’t even really acknowledged just what sexual assault includes till this past year. I know that I’ve been coerced into doing something I didn’t want to along with sexual harassment and I have many friends with similar stories too. One survivor story is just as important as the ones before. I can only hope that each person coming forward will inspire someone else in a similar situation because you are not alone.

Prout stated sometime in the interview how she’s “not afraid or ashamed anymore, and I never should have been” through everything. And she’s absolutely right.

Chris Brown is Not the Victim 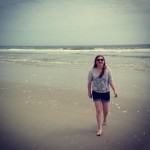 Lauren is a student and writer who wants to make a difference. She has many passions that range from pop culture and music to social justice, mental health awareness and politics. She hopes to be writing for a magazine, going to many museums and making friends with every dog in the near future. She's on Twitter a lot at @laurendemers.