A Glimpse Into The Anxious Mind

When I came back home late last night, my parents were still out. I wanted to call and tell them that I was home safely, so I dialed my mother’s number. She didn’t pick up, so I called my father next, but his phone was off. A healthy mind would assess the situation logically, like such: my parents usually go out with their friends at this time in a loud environment. My mom doesn’t keep an eye on her phone most of the time and my dad has been out all day, meaning that his phone probably ran out of charge.

Instead, my anxious mind decided that they were both in danger or that something terrible happened. Horrible thoughts of car accidents and bad news started rushing through my mind. My heart started racing, my palms got sweatier, and my mouth ran dry. I became nauseous and tense. My anxiety was feeding off of my terrible thoughts. I am an only child, so the fact I had no one to share my worries with made it worse. I couldn’t reach them for a full hour, and it might have been longer if I hadn’t contacted their friend and asked if she knew where they were.

I even started to make links to unrelated things that happened earlier, like listening to the song “Another One Bites the Dust”. I thought they were all hints from the universe leading up to something terrible, when they were entirely and logically coincidental. When I was finally able to reach my parents, I was still shaken and my thoughts had gone beyond my grasp. I went into a dark state of mind for the rest of the night simply because someone didn’t pick up the phone.

This might seem ridiculous to some, but completely understandable to others. If you don’t understand why I reacted that way, it is because I cannot help it. During an anxiety attack, or other smaller anxious moments, the brain activity is a lot higher than usual. Anxiety is important because it keeps our fight or flight response sharp, but a brain diagnosed with generalised anxiety disorder often feels too much anxiety, which can hinder the normal thought and activity process.

According to Pfizer, up to 1 in 4 adults will have an anxiety disorder in their lifetime, meaning that it is very common. Some people might not even know they suffer from the disorder, this makes it harder to deal with, despite the many ways one can try. If the signs above sound like you or someone you know, it is best to see a professional to help control the anxiety. Organization of thoughts and tasks, diaries, deep breathing, and meditation are some of the most effective ways that could ease the anxious mind.

In this article:#printissue
Up Next:

Falling in Love & Anxiety: What They Don’t Tell You 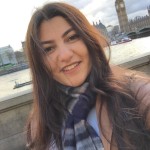 Farah is an Egyptian living and studying journalism in Dubai. She is 18 years old, a Sophomore at university and is a Virgo. She loves to sing and write and is always in contact with her creative side. You can always find her with headphones in her ears or a book in her hand. She has a lot of interests including but not limited to Harry Potter, Parks and Rec and Broadway, which she hopes to be on one day. She also loves travelling and meeting new people and hopes to one day live in Manhattan.

Going Off My Medication Was The Worst Experience Ever

Top 5 Costumes We Should Ditch This Halloween

Have Schools Been Enabling Rape Culture?