Latinxs Can Be Anti-Black Too

Anti-blackness happens in all non-white communities whether that be in Asian, and Latinx. It is also not limited to Black communities; it is a thing and it is real. A couple of days ago a Colombian woman by the instagram name of @andreinaco posted this:

Her caption translates to: “Halloween is for you to be whatever you want to be…Today we are people who are very loved, and very tasty” (sexy, hot, etc) #AllLove #AlejosHalloweenParty. This is modern day blackface and is completely unacceptable.

I think many Latinxs forget that Afro-Latinxs exist and are as black as they are latinx.

Latinxs don’t recognize the history of blackface and how incredibly offensive and dehumanizing it is to actual black people. As seen in this picture, being black is often associated with being a savage, enjoying watermelon, and having bulging red lips. Being black is often equated with ugliness and the darker you are, the more inferior you are to other races. What makes it even more disgusting is the fact that Colombia itself is the second largest country in Latin America (after Brasil) with Afro-decendants .How is it that a country with a high number of Afro-Colombians can be so ignorant to the fact that black people are not costumes that non-black people can dress up as.

Many Latinxs deny the fact that they can be racist because they are non-white and racism only applies to whites, but forget that being anti-black is a form of prejudice. In addition to this, many of the ideologies embedded into our minds by relatives are highly anti-black. Latin and Central American countries tend to depict the blacker your skin, the uglier you are. It can be seen for example: when lighter skinned Latinxs are shown in the media more than Afro-Latinxs ever will.

If you were to look at Latinx celebrities you would see that most of the people who represent the culture are more than often white passing. And also lighter skinned or white passing Latinxs tend to forget the advantages they have in society because they are often mistaken with being white. Blackness is often associated with ugly, dirty, inferior, and for Latinxs to see it as a costume that can be taken off is disgusting. Instead white-passing Latinxs should use the privileges they have to speak out about the injustices black Latinxs face on a daily. Afro-Latinxs are often seen as pure black or Latinxs, as though one cannot be if the other exists and that is another huge issue.

But overall, Latinxs can be just as anti-black as white people. I repulse at the idea that being anti-black is still a thing in 2016 and that the world forgets that Afro-Latinxs exist and are very much around.

In this article:anti blackness, blackface, latinxs
Up Next: 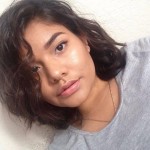 Stefhanie is a high school senior and plans to major in Chicanx Studies in college. She enjoys reading poetry and eating mangos. She is a first-generation Chicana. Find her on twitter: @stefhaniexo and on instagram: @stefhaniezy

Dear Asians: We Need To Address the Anti-Blackness in Our Community

Problems in the South Asian Community We Need To Address

Halloween is Not an Excuse To Be A Horrible Person