Top 5 Costumes We Should Ditch This Halloween

It should be a known fact that cultural appropriation runs loose on Halloween. Participants have used it as an excuse to appropriate other people’s cultures, heritages, and sacred traditions. They have the tendency to treat someone else’s culture as a joke, and once Halloween comes around, people pick and choose aspects of different cultures and attempt to sell it as a costume.

I get it, accidental appropriation can result from youthful ignorance and miseducation and that’s why you should make it your goal to triple-check that what you’re wearing this Halloween does not offend someone else.

Yes, this means that you may want to consider ditching the Pochahontas costume this Halloween. Sticking feathers in your hair and wearing some type of animal skin is appropriating Native American culture. It doesn’t matter if you’re dressing up as Tiger Lily from Peter Pan or an Indian from your favorite cowboy movie or some other fictional character that steals from someone else’s culture. Most renditions of Native Americans in the media play on offensive stereotypes. Even if you’re ‘part Cherokee’, what you’re doing is not okay. What you’re wearing most likely doesn’t represent Native American culture in the least. It’s bad enough that their land’s been stolen. Leave their culture alone.

2. Anything That Involves Blackface

This absolutely includes renditions of ‘thugs,’ ‘rappers,’ or ‘gangsters’. These costumes are often just a poor excuse to appropriate Black culture. This means that you should probably throw away the fake gold teeth and chains, as well as the bandanas. Especially if your skin color doesn’t match the image you’re portraying, dressing up as your favorite rapper may not be the best idea. It dredges up a vivid past of racism, blackface, and using Black culture for White entertainment. It’s a tradition that should be left in the past.

3. Anything that Infringes on Mexican Culture 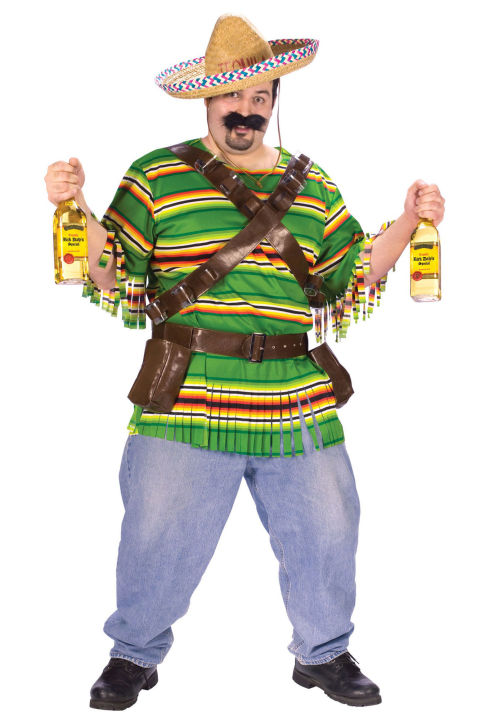 It’s a no to putting on a sombrero or a poncho and calling yourself a Mexican for Halloween. It’s crude and in no way represents Mexican culture. Instead, it fuels age-old stereotypes that are in desperate need of being put to rest anyways. Believe it or not, a piece of fabric cannot accurately represent an entire culture.

If you’re not Arab, in what world does it make sense to wear Arab attire? This attire holds a meaning, and to wear it just because it completes your costume is beyond offensive. This also includes dressing up as a Taliban member or some terrorist. That’s not only culturally offensive but socially offensive… just no.

5. Geisha Or Anything That Plays on Asian Culture

Treating Geishas as costumes play on the toxic hypersexualization of Asian women in particular . It objectifies an entire history of a sacred tradition and denotes an entire ethnicity into a skimpy piece of fabric. It’s dehumanizing.

There’s a fine line between cultural appropriation and appreciation. There’s a difference between treating a culture as a costume and actually fueling your intrigue by looking into the culture’s rich history. Sometimes it’s hard to avoid appropriation because of the amount of potentially offensive costumes constantly marketed by culturally insensitive companies, but the least we can do is double check if our costumes are problematic. This Halloween, let’s chill with the appropriation. Please.

In this article:#printissue
Up Next:

Blackface: The Old Face of Racism

The Failure of the “Black on Black Crime” Argument

Nyah lives in Miami, FL where she studies journalism and creative writing - any questions, comments, or concerns can be sent to nhardmon@affinitymagazine.us.

Going Off My Medication Was The Worst Experience Ever

A Glimpse Into The Anxious Mind

Have Schools Been Enabling Rape Culture?