Please Vote: The Stakes Are Too High Red or blue? Black or white? Good or bad? Tomorrow is Election Day, and after such a terrible election season, one would think the choice was easy, right? Because only one of the candidates is actually prepared. Because the other one is a racist, xenophobic, accused child rapist. The choice is easy, right? Right?

No, instead, you have decided that rather than choosing, you would rather stand in the neutral gray area. Forgetting in the process that this mess you’ll soon be responsible over will have a massive collateral damage.

We are hours away from the presidential election, yet thousands have chosen not to exercise their right to vote. Justifying it with the misconception that “it won’t make a difference.”

As someone who cannot vote, think about my utter frustration and lack of understanding whenever I hear someone say “I’m not going to vote this year. I don’t like either candidate.,” or better yet, “I think Trump is trash, but I’m still not voting for Hillary.”

Let’s look at the facts for a minute. Okay? I’m not about to pull out a sword and shield and defend Hillary. Not quite, but let’s look at our choices for a minute. Thankfully, the Atlantic has a wonderful article with a list, of why he’s such a terrible, hypocritical person to elect as president.

Don’t worry if you’re not in the mood for reading it. Here are the highlights:

The “Cheat Sheet” version of all the reasons for which he’s such a terrible person to elect is so long, in fact, that I can’t sum it all up in bullets.

But no, let’s still leave the possibility that this monster might become president all up to chance because the other candidate has some shady emails. Perfectly logical and coherent solution, yes.

However, I bit the bullet. I decided “let me just check out all of the aspects he proposes and see just how much the entire country would be affected if this man were to be elected.” So, I went to the heart of the beast. I read the 2016 Republican Party Platform. (It was as beautiful of an experience as one would imagine.) Wonderful highlights include proposals such as:

For more mind-numbingly brilliant proposals, filled with great examples of what an elaborate oxymoron might be, just check it out.

Still not swayed? Still think one vote might not be enough to actually make a difference? How about we talk about the fact that we might possibly get to watch a country go up in flames and bring my own down with it while having no power at all to prevent it.

All because “The other candidate was shady”, “She had those emails” and “She’s a dirty politician.” But really, is it worse than having a racist, xenophobic, homophobic, ignorant, accused rapist as a leader? Do you really want that to be part of your history all because you were too proud to “choose the lesser of two evils”?

In this article:politics, vote
Up Next:

Day Two of the Standing Rock Experience: The Real Problem

Why Do Candidates Still Put Out Negative Ads? 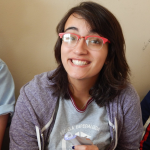