Many Artists Suffered With A Mental Illness

“I think that the genes for being an artist and mentally ill aren’t just related, they are the same gene, but try telling that to a bill collector. ” – Neil Hilborn

Artists vary from a multitude of forms. There’s the generic idea of a painter, there’s a sculptor, a writer, those of the performing arts, fashion, media, graphic design and so on..

The list constantly expands everyday because art cannot be tamed. Art is like a liquid; it adjusts according to its environment. It’ll change in form and state, vary in quantity and take the shape of the box it’s put into.

But what happens when the box you’re put into is too small to contain everything you have to offer? What happens to the liquid spilt when you’re constantly being shifted from box to box in search for one that’ll stop mismatching with what you can offer? The reality of this situation is, art has always been a powerful outlet, dating back to Ludwig van Beethoven and Vincent van Gogh to Georgia O’Keeffe. Mental illnesses affects so many people today. All of the examples above who have exuded art from their very surroundings have battled mental illnesses and made peace with their demons while producing some of the most well known forms of art.

An illness, especially that associated with the mind is severely undermined and often misjudged. If nothing else, they can easily be pushed aside as to not having existed. However, they are inexcusably present and are being dealt with everyday by a different person who perceives their mental illness in a different way. A mental illness is a Rubik’s cube because you are constantly trying to shift the tiles and find a correlation that fits in order to make sense of where you stand. The mind is far too complex to be undermined, especially since only 10% of it is being harnessed by us. That 10% needs a passageway that isn’t blocked by or re-routed by anxiety or pangs of depression (amongst various other forms of mental illnesses).

“We so seldom understand each other. But if understanding is neither here nor there, and the universe is infinite, then understand that no matter where we go we will always be smack dab in the middle of nowhere. All we can do is share some piece of ourselves, and hope that it’s remembered. Hope that we meant something to someone”
― Shane Koyczan

Every artist wants to leave their mark on the world. They want to he heard or understood. Van Gogh, one of the most famous names in the art culture world was believed to have had Autism, he also on occasion experienced hallucinations and delusions which led him to believe he was (in his words) ‘mad’. This although was a burden beyond burdens to any soul, contributed to the breakdown of the strict realism of paintings and expression and allowed ways for artists to better communicate emotions and concepts.

“In our society it is not easy for people with mental illness to find opportunities to engage (to immerse themselves) in activities they find meaningful, to experience a sense of accomplishment, and to be part of a community of shared interest and mutual concern,” he wrote. “Art can make it possible.” – Michael Friedman, a Columbia University mental health policy professor.

He battled his mental illness for years before it won his war. Shortly after his passing, his art began to seek recognition which put his pieces in some of the highest rated galleries (including the Louvre) in the modern world.

Which goes to show that even when things seem pointless, when art is underappreciated, turned down and/or neglected, there will come a time it is appreciated. Van Gogh thought the same of his work. He couldn’t sell some of his best pieces to sustain a basic meal, but look at his work now. 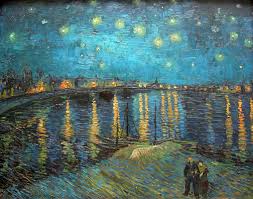 It’s hard for people nowadays to appreciate artists because there are so many varying forms of them; and if picking a handful of them to really invest in, wasn’t a struggle enough, actually purchasing the art would be. And between rent and the basic incomes, there isn’t much room to compromise on money and so artists’ quit at a young age. They are discouraged and put down and told to find a career that are more ‘stable’. But remember that art is something no two people can do the same. Art is a fingerprint. It’s a unique trait amongst a sea of similarities and can be used to channel your voice when you need it to.

Never snuff your intuitions and never forget your struggles, and most of all, never give into your mental illness. Work with it. It isn’t easy but it will get easier over time.

How To Take Care Of Yourself During Exam Season

An artist at heart; I am what I am because of my experiences. I speak my mind and in doing so, I hope to provide a voice for those who don't have one, yet. Power to the people; all voices alike, damn right I support it.