Baby It's Cold Outside is Actually A Song About Rape

‘Tis the season, and we all know what that means: being inundated with the unmistakable tune of “Baby It’s Cold Outside” on the daily. What is also unmistakable are the lyrics, now considered to be extremely problematic, that highlight a woman being put in a uncomfortable and coercive situation by a man. I mean c’mon one lyric is actually “Ought to say, no, no, no sir” to which the man responds “Mind if I move in closer?” It’s mindblowing that the world ignored lyrics like these for the near 60 years that this song has been out.

In 1944 when this song was written, marital rape wasn’t an idea that crossed people’s minds. Men were allowed to treat women like this and it wasn’t given a second thought. But today in 2016, more people are catching on to the issues brought up by this archaic song. One couple decided to act on it.

Lydia Liza and Josiah Lemanski of Minnesota crafted their own version of the song, titled “It’s Cold Outside”, all with lyrics highlighting consent in relationships. The lyrics highlight the importance of consent in all romantic interactions. Liza says one of her inspirations for writing this was how common interactions like the one in the song play out.

The hilarious and honest lyrics have definitely got many people thinking about it, the song being listened to over 138,000 times by Saturday. Hopefully that this song can ring in the holiday cheer, all the while ringing in a necessary conversation for people around the world.

Listen to the song here

To All The “Loud” Girls 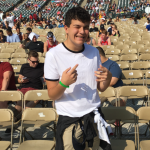