Far up north, over 500 miles from the nearest major city, is the Arctic Circle. As surprising as it sounds, the Arctic Circle (a cold desert) is a melting desert that puts hundreds of millions of people at risk. The Arctic is melting at a faster pace than ever before, and in turn, is affecting far more people than one would expect.

Unfortunately, this is not a drill. We are destroying the home of 6 major animal species and over 1,700 different species of plants, and what we’re doing to try to stop this is not enough. The Arctic Circle is comprised of over 1.3 million square miles or 3.3 million square kilometers, and since 2007 over 300,000 square miles or 776,000 square kilometers have melted. Scientists believe that the Arctic will be melted completely by 2030–humans are not doing enough to save the planet we share with other species. In the last four decades, our planet has become just over 2 degrees Fahrenheit warmer, and the Arctic has been warming at twice the speed because of the warm water funneled in from the Gulf Stream.

According to a new study led by William D’Andrea, a climate scientist at Lamont-Doherty Earth Observatory,  temperatures on the Svalbard Archipelago in Norway, located about 400 miles north of mainland Europe, have been 35.6 F˚ (2˚C)  to 36.5 F˚ (2.5 C˚) higher at any given time over the last 1,800 years. A follow-up study concluded that manmade greenhouse gasses have been and are responsible for 70 to 95 percent of the Arctic melting since the 1970’s.

How Does This Even Affect Us?

As I mentioned before the Arctic is over 500 miles from the nearest major city, so many of you may think this doesn’t matter, but you’re wrong. As the Arctic melts, our sea levels are rising, which are expected to alter rain patterns and temperatures worldwide. As oceans rise and water flows further inland, the consequences are endless: damaging erosion, wetlands flooding, aquifer contamination, loss of habitats for numerous birds, fish, plants, humans, etc.

According to National Geographic,  hundreds of millions of people live in areas subject to major flooding and damage including cities like New York, Los Angeles, Miami, Sydney, Rio de Janeiro, Auckland, and much more, which forces those living in at-risk cities to abandon their homes and flee to locations further inland. Islands that contain thousands of years of Polynesian heritage and popular tourist destinations such as Fiji, Tuvalu, Kiribati, and the Marshall Islands could be claimed by the rising oceans and it’s a disturbing reality. Along with severe damage to many major cities, we also risk losing thousands of years of heritage and history held dearly to thousands of people. 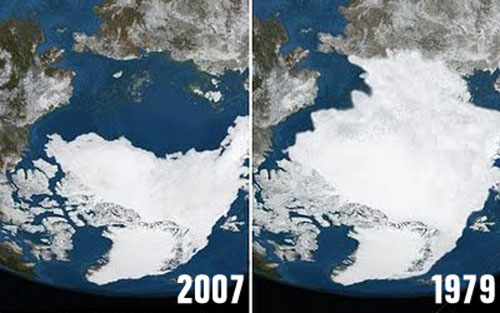 How Does This Affect the Rest of Life on Earth?

Many of us tend to forget that humans aren’t the only species on Earth. According to the United Nations Environment Programme (UNEP), we share our planet with over 8.7 million species (give or take 1.3 million) and according to the University of California Santa Barbara (UCSB), there are over 75 billion living species on Earth. Climate change affects plants and animals just as badly as it affects us, humans.

Scientists are able to anticipate climate change and rising sea levels, but with the way we’re living today, is it possible that there’s a lurking disaster, even scientists aren’t able to predict?

In this article:animals, Arctic, climate change, Environment, humans, oceans, plants
Up Next:

Why India’s Ban on Pakistani Actors is Uncalled for