Earlier this week, Australian pop-star Troye Sivan announced on social media that the music video to his latest single, “HEAVEN”, would hit YouTube on the day Donald Trump and his gay-hating, equally moronic VP Mike Pence are inaugurated into office. Many have viewed this as an act of protest on his part. Others consider it just a bit of comical irony. However, one thing is for sure: Sivan choosing this specific date to air such an open expression of his homosexuality (let’s just say the gif he used in his announcement included another man aggressively caressing his face… from behind) sends a message of solidarity to LGBTQ+ people in America and around the world who have genuine concerns about the next four years.

“HEAVEN” documents Troye’s personal struggles of coming out as gay and his thoughts while doing so. Since the song’s release in November 2015 it has resonated deeply with LGBTQ+ people worldwide, striking a connection with fans that even Sivan himself wasn’t expecting. Thousands have shouted the emotional lyrics “If I’m losing a piece of me, maybe I don’t want heaven” while sporting pride flags at his concerts over the past year at his nearly 100 concert stops. At his show in Washington D.C., Sivan went as far as to help one of his biggest fans come out to her mother, who was watching from the back.

Despite a grim future ahead of us, social leaders like Troye Sivan continue to create, inspire and remind us that while we might have a homophobic prick or two or twelve in the White House, it’s important to stay prideful, love who we want to love, kiss who we want to kiss and give the middle-finger to anybody who tries to tell us not to.

Iain S. Thomas: The Author Who Will Make You Feel at Home

Be a Decent Human Being And Respect Tyler Posey’s Privacy 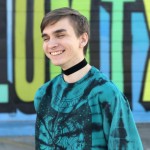