Breaking Trump's Administration: The Fight Against Neutrality and Ignorance

The evils of discrimination and intolerance have always been alive and thriving in our country. As a direct result of Trump being elected, several irrefutable acts of hatred have occurred that we must be aware of and resolutely against. If we acknowledge and fight the dark side of America every single time it is brought into the limelight, it will still not be enough. We need to break down the roots of these problems in everyday life.

We must fight against neutrality, indifference and ignorance.

It is far more simple and easy to let ignorance run our lives by viewing conflict as a mere interruption to our work, lives, and dreams. But looking away from the truth regarding the injustices in our government or deeming unlikable news and facts as fake, will eventually reduce lives to being meaningless. People are forgotten and denied rights when others don’t care enough to educate themselves about pressing issues in communities they don’t belong to.

Our actions need to reflect that Americans bear witness to the struggle of others and will not allow any more bloodshed and prejudice to go unnoticed.

However, there is a clear and concise line between fighting other people’s battles when they don’t need your help and recognizing a call to action as an ally when you are capable of amplifying the voices that need to be heard. Identifying your role in political and social situations is vital to sustaining unity in protesting against the actions of Trump’s administration and its followers.

Although we cannot allow the bias and discrimination of Trump’s agenda to dominate our lives, ignoring the pain and despair of others when we possess power to help the situation will only make us allies to Trump’s hate.

We become inhuman when we choose to forget the suffering of others while still calling ourselves an ally.

Compassion turning into rage is very human and exactly what we need to fight. We can create art that leaves a viewer questioning interpretations and inspirations, sing songs of pride and confidence, write and draw attention to little known horrors, and protest with every ounce of our beings. That’s how we translate anger to productivity. Indifference will never be creative, evoke emotion, or create change. Using empathy, determination, pride and frustration to our advantage is how we can protest most efficiently.

We can save our country when we pledge to be active and revolt against hate everyday, instead of allowing indifference, neutrality and ignorance become our legacy.

Ten Tips If You’re Dealing With Homesickness At College

One Last Time, My President is Black 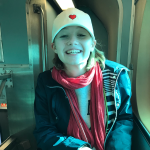 Kenna Howorth is an aspiring journalist and poet who never stops fighting for equality. When she's not writing for Affinity, you can find her reading Shakespeare, acting and singing in her school theatre department, and working at her school newspaper, the RB Clarion!