Pro-life protesters marched in Washington on the January 27, 2017 although I don’t think they’re entirely aware of what they’re protesting for. They already have a very pro-life government and even a president who believes women should be punished for abortion, so what else do they really need? From the “heartbeat bill” to trying to defund Planned Parenthood, this protest is nothing more than an attack on a woman’s right to reproductive health care.

Despite what opposers may tell you, abortion is not an easy choice. It’s not a simple, whimsical decision. Women consider their options, and for many it just so happens that abortion is the best one. There are so many different situations that lead to abortion being the only option. Quite frankly, I find it disgusting that pro-life protests are even a thing. They’re often very hateful and show no understanding of the situation some women are in. Rape, incest, financial problems, family life — the list goes on.

Quite simply, if you disagree with abortions, don’t get one. You have no right to tell someone they have to go through with a pregnancy. And the less accessible abortions are, the more women are going to die.

It’s ridiculous that there is still debate over this. Surely if pro-life supporters are so passionate about life they would at least want women who do choose to have abortions to have a safe one? Also, most pro-life supporters do very little for the child once it’s born. Okay, you’ve forced a woman to have a baby… now what? She has no money. Are you going to help pay for it? Probably not.

At the end of the day, yes, you’re allowed an opinion, but to me it’s an opinion I cannot even fathom. It’s not your body. It’s my body. It’s me who’s going to have to go through this, not you. Sure, tell me the alternatives, but this is my choice and you have no right to control what I can and can’t do with my body.

Why You Should Be Supporting The Un-Idle Collective

Pro-Choice Does Not Mean Pro-Abortion 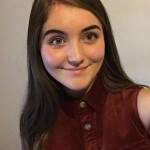 Paula is a 16 year old high school student in Scotland who aspires to study law, but always be writing. She is passionate about feminism, politics and virtually any social injustices.