Ecuador's History of Femicide, and the Uprising Against It

When we think of the women’s rights movement, we often think of the early suffrage movements and those who are fighting to change the image and expectations for women across the globe. We remember women like Susan B. Anthony, Sojourner Truth, and Malala Yousafzai for their strength and perseverance through the danger and discrimination that is often directed at them solely because of their message. These women and numerous others have spoken of our rights and our power as equals to the men who have so often led society. Around the world, even today, there are women fighting to be heard as the intelligent and unique people they were born to be.

In modern day America, we often focus on the achievements and protests by women’s rights activists in our own country. Meanwhile, across the globe, there are other countries who are still fighting and successfully making a change after years of discrimination and violence towards women. One of these growing movements is located in Ecuador, where the oppression of women began during the Spanish colonization period.

Shortly after the Spanish entered Ecuador, the cult of marianismo rose to power. It was focused on the emulation of the Virgin Mary. Women were told to be “virginial and pure like Mary. . .  Like Mary, they should accept the fate that is handed to them. In short, women are expected to be good wives and mothers, which typically includes self-sacrifice and putting one’s family and it’s survival above all else”  which automatically perpetuates the stereotype of a submissive and weak woman.

To become a wife and mother is a choice, not something that is handed to a woman as a purpose by a man.

Women were unable to vote until 1929 and struggled to receive proper schooling as they were constantly working or married young. Women and Indigenous people in Ecuador suffered under the patriarchal society laid before them and inside the Catholic church, at the time led by elite white males. Today, around 14 percent of women in rural areas are illiterate while in urban areas, only 4.3 percent are illiterate. They must drop out of school to help provide for their families and receive far less payment due to workplace discrimination.

For many years, white feminists led protests that would not cover the indigenous women in the country, and although eventually, the women received legal support and rights, they were still considered the subordinates in society. The law was not entirely practiced.

The women of Ecuador also struggled with high fertility rates due to rape, sexual harassment, workplace discrimination, and a lack of reproductive health resources. Women cannot provide proper prenatal care without the money to pay for them, especially those women living in rural communities. Six out of ten women have experienced physical violence from men in Ecuador, and are often severely abused at home. Nearly 69 percent of girls between the ages of 10 and 15 have experienced verbal, physical, and sexual abuse. Throughout the past century, Ecuador has made many legal improvements but did not directly try to stop the violence.

In any country, offenses of abuse, rape, and violence should result in legal punishment. They are inexcusable and gross violations of human rights.

Today, as the women’s rights movement grows, it is reaching Ecuador and flourishing.

In Nov. 2015, over 3,000 Ecuadorian artists and activists marched through Quito for the International Day for the Elimination of Violence Against Women. The organization Vivas Nos Queremos led the march. Numerous organizations for human rights joined the protest to support the women of Ecuador and bond over a desire for social peace and unity.

In 2011, the United Nations created an initiative called Cartas de Mujeres. Thousands of women sent in letters describing their suffering with abuse and violence under the patriarchy. A women named Suzanne Lacy organized a group of men to read the stories of Ecuadorian women. Lacy wanted to give the men a practical understanding of their suffering to once again prove the need for activism in their country. The men were encouraged to think of what they can do as individuals to assist the women around them and fight against gender-related violence. Lacy’s project was aimed to unify a country once divided by gender discrimination. By engaging people in art, activism is applied to the lives of individuals.

Today, Ecuador is moving forward as they fight for legal punishment against abusers and rapists. They have defined femicide as a crime and even desire to ban officials who have a history of violence against women. Internationally, we must work to improve the lives of those around us experiencing discrimination and torture due to their identity. We must use our art, love, and influence to defend those who have been deemed subordinates due to unhealthy origins of our countries. We must follow in the footsteps of Ecuador and work to stop violence against women despite our inexcusable history.

An Interview with Body Positive & Pro-Women Unity Band, The Mrs

An Interview with Kamilah Willingham of “The Hunting Ground” 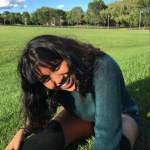