An Open Letter To You, The Person Who Doesn't Understand That Getting Into College Is Worth Celebrating

Here’s a tweet I came across on Twitter recently. Allow me to respond to it for you, since it seemed urgent, considering you asked with two question marks.

why do people announce where they're going to college like they're an athlete who's being given a scholarship??

Get your head out of your rear-end. Regardless of any outside-of-class activities, getting accepted into college is an achievement in itself. How clueless in society do you have to be to think that someone who gets into college for a scholarship is automatically more “hardworking” than someone who is accepted for full tuition?

Students go to school to enrich themselves in the major that they care about. For you to blatantly bring down those who study late nights to keep their GPA up, who work hard to achieve a good SAT/ACT score, and who write essays and enter scholarship contests in their free time to get money for college is so mind-bogglingly ignorant to me. Not everyone has the same mind capacity. One person without an extracurricular activity may work just as hard as someone else who has one or more and still get the same grades.

You are also not shining positive light on the performing arts. These artists, whether it be musician, singer, dancer, or actor all of these traits help you get into colleges. You don’t need a scholarship to be qualified as talented. Being accepted isn’t a worthless title and getting a scholarship for it is amazing, but it makes you no more or less of a contributor to the profession—free money or no free money.

Allow students who have the opportunity to go further on in their education to feel successful. By glorifying scholarships you are not only degrading those who work their hardest, but also those who never thought they would get into college. There’s students who don’t even think they’ll be able to afford the tuition or the time to get an education, because they’re already working whenever they’re not in school to keep food on their family’s table. There’s no shame in community college, especially if that person is excited that they’ll be going to college in the first place. Let them be happy, let them share it on their social media because what might mean the world to somebody doesn’t have to mean the same to you.  Simply the choice of someone attending college, to me, is a greater win than whatever money an Ivy League school could offer a person.

Open your eyes, see that there’s other people in this world besides those that you choose to see. You claim that this is “your opinion” and that we’re not “understanding your point of view”, but you’re wrong. Because on this particular topic your opinion is factually invalid. A scholarship can not technically ever be better than an acceptance just as long as every person is different. We don’t understand you’re point of view because you refuse to see the thousands of others’ points of views that see college acceptance as a dream, and new opportunity. An acceptance is not “just an acceptance” it is a wide open door for so many students that had had that door closed for them. A scholarship is an achievement but an acceptance is no less of one.

Do What You Love, Or So They Say 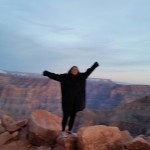 Sarah Elaebrak is an Egyptian-Filipina-American born in Brooklyn, New York and raised in Los Angeles, California. She is currently a political science major at The University of California Merced and minoring in environmental sustainability.