Until 1920, women were not allowed to vote in the U.S. 1920 was only 97 years ago. Until 97 years ago, women’s voice was not heard. In 1932, a woman had the dream to fly across the Atlantic Ocean all by herself. She was told she was crazy, for wanting to do something only men could do, yet she did it. In 1963 the Equal Pay Act, a law with the goal of eliminating the Gender Pay Gap, was finally accepted by the Congress. In 1987, after the Congress received a petition from the Nationals Women’s History Project, March was officially dictated as Woman’s History Month. There are this, and many other dates and important things we have achieved in history, but women have suffered from a long and arduous process to get themselves validated. Can we say the same about men?

In this month, it is not rare if you stumble upon comments like this:

Yo I forgot, when is men’s history month?? ? #inequality pic.twitter.com/ZjgfVLxixI

The answer to that is NEVER. And here it is why.

For years, women were considered to be less. They were not allowed to stand up for what they believed, and when they did, their voice was dismissed, they were tied to roles like cleaning and cooking because they were not supposed to be smart enough to do anything else. Women were only used to take care of men, while men had everything. If a man receives discrimination of some sort, I assure you it was not because of his gender. Also, when a woman does something different, something that challenges societies ideas, she gets bashed and insulted, but then a man comes and does something similar, he gets praised and applauded. There’s clearly something wrong there.

Men have never received the kind of hate and rejection that women experience. It is 2017 and we still get paid less, we get worse work positions, girls get called names because of the way they look, dress or act, we get called ‘bossy’ for speaking up our minds, we still get told that we can not do things, with the mere excuse of being part of a ‘inferior gender’. Have you ever heard of a man suffering the same thing?

We constantly learn about everything that men have achieved in history, and we can agree that they have done many great things, but we have many days to celebrate all that. We don’t need a specific month to acknowledge what is already acknowledged by the world. Bringing out and celebrating what is widely known and appreciated makes absolutely no sense. That is why instead, we make a call to look up and settle goals for an equal future and to cherish what women have, with great trouble, attained.

In this article:feminism, sexism, WOMAN, woman's history month, Woman's rights, women
Up Next:

Can You Be a Feminist If You Have Breasts? 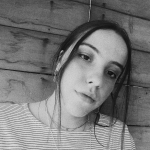 Paula is a 17-year-old girl from Costa Rica who believes in all kinds of equality and is very passionate about arts. She spends most of the time either reading, drawing, listening to music or watching Netflix.