How I Learned To Take Pride in Being an Immigrant

When I was two years old, my family and I moved from Mexico City to the United States (legally). My dad had gotten a new job and the plan was to stay for a few years. In the third grade, I met my best friend that would last around eight years. We were inseparable and knew everything about each other, everything except for one thing. What I never told her was that I was an immigrant.

To make things clear, up until this point in my life I had not encountered racism personally. The fear of prejudice that exists against immigrants in this country was instilled in me as if it was a primal instinct, and I would continue to lie to many of my friends for years after. But now, I’m over it.

Out of the many things I love about Mexico, my favorite thing is the people. The owners of local stores, markets, restaurants and coffee shops. The people who get up everyday at dawn and set up for work, and the moms who carry their babies on their backs as they trudge the world selling their own creations all for the future of their family. The 16-year-old who decided he wanted more in life, stayed away from the streets by playing instruments at church, studied during the day and worked at night, graduated top of his class, and refused to stop climbing, stop working until he had gotten a better future (hi dad, thank you).I’m proud of the country I was born in, I’m proud of my family, and I have decided that I will stop hiding and let myself be seen.

To anybody who knows what it’s like to be hiding or anybody who is still hiding, I invite you to step away from the shadows, to speak about your experiences in this world, and to educate people about where you come from, and what it means to you.

I’m not going to lie, I am shaky and am on the verge of a panic attack as a write this. All I know is that the time to step up has long passed, but I’m here now. It’s not news that hatred and resentment have led to violence, attacks, and other terrible things. There are many well-written and informative articles you can read to educate yourself on recent matters (you should go read some). However, I wanted to talk to the people who are afraid, as I was and continue to be. Whoever you are and wherever you come from, you have every right to be here, to be happy, and to experience safety and love. Remember that you won’t help anyone by reacting to hate and violence with more hate and violence. Use your experiences as wisdom and empathize with every living thing. Listen to what others have to say. Be brave. It’s important for us to remember that our best hope is to stand together.

Why We Cannot Just Forget About Charlottesville 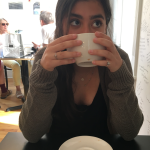