My Struggle As A High School Student With Anxiety

I was standing behind a podium in front of my class, stuck mid-sentence in my speech when my eyes began to water. I searched my notecards for my next point on factory farming, but the words were indecipherable. What language did I write my notes in? Glancing over the thirty or so students in my class, my eyes searched for my teacher in desperation. Oh God, I’m crying in front of my English class. My breathing became rough and I whimpered as I searched through my cards for something to say. The tears, more rapid and heavier now, began to wet my face. Eventually, my teacher dismissed me to my seat. My desk was against the wall; the perfect place to shrink into. Foolish, foolish, foolish was the mantra I played in my head as I coiled against the wall that let me ignore all the staring faces. As to be expected, my confidence had turned into cowardice.

I have social anxiety. If you don’t know what that is, The Social Anxiety Institute defines social anxiety as “the fear of interaction with other people that brings on self-consciousness, feelings of being negatively judged and evaluated, and, as a result, leads to avoidance.”  It’s estimated that 15 million people in the United States live with social anxiety disorder, varying in intensity. Social anxiety is often masked as shyness, but you can still live a normal life if you are shy.

My social anxiety caused me to miss out on memories that all high schoolers should have. Many normal social interactions, such as small talk and going to school events, were not a possibility for me.  Sure, the opportunities to improve on my social skills were there for me.  I could talk try to talk to my lab partner about her weekend or go to a football game, but every time the words snuck up my throat, they became lodged. My words were sporadic. My voice sounded bruised and broken. I broke out in a sweat and fidgeted with my hands when I would anticipate any sort of social interaction. As well, all of this would leave me feeling self-conscious, anxious, and alone.

During my freshman and sophomore year, my social anxiety was at its peak of destruction. Just that summer before sophomore year, I had decided to quit volleyball after making the JV team since I couldn’t make friends with anyone on the team. In May, I got a job at a fast food joint. I feared going to work every day because my job was to socialize with our customers and my coworkers. Whenever I felt myself panic, I would lock myself in the employee bathroom until I calmed down or until someone knocked on the door. Sometimes, I feigned the flu when I knew my social anxiety overpowered my desire to go to school.  What was worse than missing out on high school festivities was the consistent insecure feeling that I didn’t belong in any place where people are, which is everywhere.

Later on, in my sophomore year, my family finally disclosed my “shyness” as being something much more severe. I began to talk to a therapist and I started medication soon afterward. The recovery period wasn’t easy, but I knew that things would get better.

I just started my senior year of highs school. Although my social anxiety still creeps up on me from time to time, I am able to live a normal, high school life. I plan on going to the next football game, I’m picking out a dress for homecoming, and I already have made a few new friends this year. I also joined my school’s speech team. I once cried in front of my English class, but now, I speak in front of people for fun.

How Your Loved Ones Can Help You with Your Eating Disorder

How My Anxiety Disorder Led to a Love for Minimalism 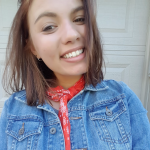 I am currently attending my senior year of high school, and I am planning on studying journalism and anthropology in college. While I'm not in school or writing for Affinity, you can find me binge watching GOT or Nat Geo documentaries, reading a novel, or taking pictures of my home town and the people within it.