How To Be Productive While Procrastinating

Procrastination: the action of delaying or postponing something, according to the Oxford dictionary, and also something that most (if not all)  students are very, very familiar with. Whether that procrastination comes in the form of putting off your daily thirty minutes of cardio or homework that’s due the next day, everyone’s experienced it at some point.

But no matter! While procrastination may not be the best habit to have, it’s a perfectly normal one. Even so, many of us feel as if we’ve wasted valuable time doing unimportant things, but that doesn’t have to be true. Here are some ways you can be productive while procrastinating.

No, I don’t mean that literally. Think of small, mundane tasks you have to eventually get done (cleaning your desk, tidying up the bookshelf, watering the garden) and switch between those until they’re completely finished. The idea is that because there are so many little tasks you need to accomplish and you’re constantly switching between them, the likelihood is that you won’t get bored and you’ll be able to see them through. Perhaps then you’ll get hit by a chunk of good ol’ motivation and go back to doing what you needed to do in the first place.

… then watch something educational. Even if the subject matter has absolutely nothing to do with what you’re currently supposed to be working on. They say that general knowledge comes in handy when you least expect it, like in the random class discussion you’re going to have in the near future. Embrace the power of the internet and use it for your own good.

3. Attend To Your Furry Friend

If you’re in possession of a friendly furry companion, then there’s no better time than the present to see to their needs. Take your pup for a walk, or watch TV with your cat. Play fetch, or teach them a new trick. This not only puts you in a better mood, but it also gives your pet its daily dose of love and appreciation.

As for those who are animal-less (like myself), what’s stopping you from going outside and soaking up the sunshine? Vitamin D for the win!

Use this opportunity to prioritize and break down your tasks. One of the biggest reasons why I procrastinate is because tasks look daunting and it always seems like there’s so much work. Somebody advised me a while ago to create to-do lists and expand everything into sections and sub-sections, and I’ve never been intimidated by prospective work (to the point of procrastination) since. There’s not much that can be more satisfying than checking off a little box every twenty minutes. It’s like your brain is telling you, “Yeah, you did it! One step closer to being over and done with this.” If nothing else, you’ll at least feel a bigger sense of accomplishment.

In short, the best thing you can do while procrastinating is to make the most of every moment. The day, the minute, the hour – it’s all yours, so make sure that you make it an enriching one. 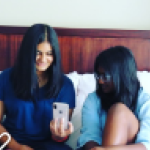 Yasti is a teenaged girl with a passion for reading, writing and expressing her creativity in general. If she’s not coming to the phone, you’ll probably find her daydreaming about the newest Taylor Swift album.