This article was co-written by Lucy Parry and Mikayla Guarasci

February is Black History Month and we are going to highlight a few trailblazers for people of color in sports.

Many of you will know the name Jesse Owens, but how much do you actually know about him?

He was born in Oakville, Alabama in 1913 as James Cleveland Owens, originally known as JC. When he was nine, Owens’ parents moved with their 10 children to Cleveland, Ohio as a part of the Great Migration, in which 1.5 million African-Americans migrated from the KKK-infested South to the urban, industrial and slightly more accepting North. At his new school, when he said his name was “JC” in his strong Southern accent, the teacher thought he said “Jesse.” The name stuck, and he was known as Jesse Owens for the rest of his life.

Owens accredited the success of his athletic career his junior high school track coach at Fairmount Junior High School, Charles Riley. Riley helped Owens both technically and mentally. Riley taught his athletes that training for longer races would help them in the 100- and 200-yard dashes. His motto, “Train for four years from next Friday,” emphasized long-term rather than short-term gains. Riley allowed him to train before school, so he could work in a shoe repair shop after school to help support his family. Owens also met the woman who would become his wife, Minnie Solomon, at Fairmount Junior High School. At the National High School Championships in Chicago, Owens attracted a lot of attention as he equalled the world record of 9.4 seconds in the 100-yard (91 m) dash.

Owens attended Ohio State University where he was affectionately known as the “Buckeye Bullet.” Under the coaching of Larry Snyder, Owens won a record eight individual NCAA championships, four each in 1935 and 1936. Though Owens enjoyed athletic success, he still experienced segregation. He had to live off campus with other African-American athletes. When he travelled with the team, Owens was restricted to ordering carry-out or eating at “blacks-only” restaurants. Similarly, he had to stay at “blacks-only” hotels. Owens did not receive a scholarship for his efforts, so he continued to work part-time jobs to pay for school.

At twenty-one years old, Owens competed at the Big Ten Track and Field Championships in Ann Arbour, Mich. He set four world records in under an hour including the 220-yard dash and long jump. His long jump world record of 8.13m stood for 25 years and, to this day, it is still the Ohio State Record. His day at Ferry Field in Michigan was one of the greatest individual performances in American athletics and he did so with a back injury after he fell down a set of stairs at Ohio State University. At the track meet, he used the 100-yard dash as a test for his back, yet he tied the world record again.

Owens decided to enter the 1936 Olympic Games in Berlin, Germany. At this point, Hitler had complete control of the country. He believed that Aryan people (Northern European white people) were the superior race and he wanted to use the Games to prove this to the world. Owens stopped Hitler and his Aryan athletes in their tracks as he won four gold medals in a single Olympics (in the 100m, 200m, long jump and 4x100m relay), which made him first American track and field athlete to do so.  After the games, President Roosevelt refused to acknowledge Owens’ achievements via phone call or telegram or by extending an invite to the White House.

The four-time gold medal winner turned down an invitation to compete in Sweden immediately after the Games with fellow 1936 stars. The 22-year-old’s head had been turned by several lucrative commercial offers back in the USA. It proved to be a decision with considerable consequences. Owens’ amateur status was swiftly withdrawn, which effectively ended his athletics career. He found that the commercial offers soon dried up, and having had his first daughter before the Games, he needed money. Fast. So, he challenged small-time sprinters to races for cash, giving them a 10-20 yard-head start before beating them comfortably. He also raced against motorbikes, cars, trucks and finally, horses. Later, Owens admitted that he didn’t enjoy the fall from glory, but that it was a necessity, saying:

Owens with the horse he beat. Credit: Horse Network

Following his days in athletics, Owens became a public speaker and he spoke to companies as large as Ford Motor Company and the U.S. Olympic Committee.

Jesse Owens passed away on March 31, 1980 at age sixty-six in Tucson, Arizona after a battle with lung cancer.  He left behind his wife and three daughters who continued the Jesse Owens Foundation.

Jesse Owens showed the world that Hitler’s view that the Aryan race was the superior one was completely wrong and based only on racism. He showed that black people are just as talented (often more so in the sprints) as white people. Even though he faced segregation and discrimination, Owens kept running (and jumping) because he loved it and he knew he was good at it. He paved the way for other black athletes to follow in his footsteps. He will forever be remembered in Olympic history.

Owens’ legacy lives on in the minds of most athletes, including the most well-known athlete of the modern age: Usain Bolt. Bolt set his 100m and 200m world records at the Berlin 2009 World Championships, in the same stadium that Owens won his four gold medals in. “Jesse made history here, so I’m going to try to do the same,” Bolt said, before the 100m final.

In this article:Black History Month, Jesse Owens, Olympic Games
Up Next:

Jackie Robinson: The Trailblazer for Black Athletes in Professional Sports

The Origins of Black History Month: A Look To How Far We’ve Come 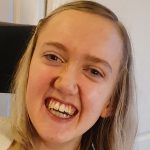 I come from Cardiff, which is in the UK. Writing is one of my greatest passions, I just feel so happy when I'm writing. I am a strong believer in equal rights for everyone, as I have a physical disability. You can follow me on Instagram @lucyparryyy and on Twitter @Lucy15Parry

Why Is Black History Month The Shortest of the Year?

This Black History Month, I Want to Talk About Mental Illness