Why I Don't Stand For the Pledge of Allegiance

I learned the Pledge of Allegiance in kindergarten, at the age of five. It is so ingrained in my head that I could recite it in my sleep. And now, eleven years later, I no longer stand up at the beginning of each school day and pledge my allegiance to the United States of America. I remain in my seat.

The flag does not stand for black people. Gay people. People with disabilities and diseases. Immigrants. Assaulted women and rape survivors. Children shot in schools and people shot in streets. Minorities. Victims.

The part of the pledge that bothers me the most is the very end: “…with liberty, and justice for all.”

I do not consider a racist, sexist, homophobic, and discriminative judicial system to provide “justice for all.” Nor do I consider racist, sexist, homophobic, and discriminatory government policies a promise to that statement. Never in the United State’s history has the country done things in a fair way. We were built on hatred. 241 years and the 2016 presidential election later, the government still enforces a cruel prejudice against minorities and victims.

The flag did not stand for black people when the United States enslaved them and later enforced Jim Crow laws. Today, the American black community fears every single day that they might get shot unarmed in their cars or blamed for crimes they didn’t commit. White supremacist organizations such as the KKK still exist in the United States, and President Donald Trump does nothing to condemn them.

The flag does not stand for women, because for the longest time, strict laws were made confining women and their bodies; historically, women were belittled to the point where they weren’t even allowed to wear bathing suits or play tennis. The United States made it so that women could not vote, and people had to fight incredibly hard for this so called “justice.” Past and present, the American government shames and restrains women from attaining abortions and making decisions about their own bodies. And, furiously, I make this reminder: in 2018, the Supreme Court allowed a person with accusations of sexual harrassment and attempted rape to become one of the most powerful figures in American politics. If the flag stood for women, then women would have the ability to make decisions for their own bodies and rapists would be sentenced what they deserve.

The flag does not stand for the LGBTQ+ community. It has endured violence and prejudice since the very beginning. It wasn’t until Barack Obama’s presidency that legal marriage became an option, and there are only 14 states in America that protect youth from conversion therapy. A person’s sexual orientation can result in employment discrimination in 28 states, and even more when it comes to people’s gender identity. In 2019 alone, Donald Trump attempted to prohibit transgender people from joining the military, which the Supreme Court just recently approved of. The social standards of America do not look at the LGBTQ+ community as human beings; what makes it such a tragedy is that the government doesn’t either.

The flag does not stand for immigrants. The issue of immigration is a difficult topic to discuss, but the treatment of human beings, especially ones seeking asylum, isn’t. Human beings should not be held in cages, deprived of proper food and water, or separated from their families. Yet, the United States views these refugees as animals. Besides immigrants at the borders, America is full of generational immigrants struggling to find a place of acceptance from within. Racism and xenophobia comes to play here, with the social norm tending to be a disgusted view of diversity. Donald Trump and the government refuses to be of aid, and on the contrary fuels the fire under an “animal vs. human being” concept. The immigrants that make up America and the ones asking for its help are included in the “justice for all” statement–but the flag still doesn’t stand for them.

The list goes on. The flag waves only for the Americans who never got hurt. How can you expect me to stand and pledge my allegiance to it?

America is a place of pride. “Disrespecting” the flag earned me horrible glares and a potential authoritative talking-to. I can never promise that protesting won’t come without consequences; but I can promise that the consequences are worth it. By refusing to stand, you are standing up.

In this article:america, high school, LGBTQ, president, racism, rape culture, school
Up Next:

Bernie Is A Millionaire, So What?

The Problem With Hollywood and Diversity 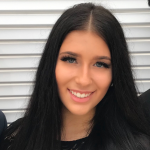 Abigail is a 16-year old girl from Pittsburgh, Pennsylvania. A sophomore in high school, she loves to write, travel, and advocate for social justice issues.