What the Loss Of Kirstjen Nielsen Means in Trump's America

“Instability” has been a recurring theme since President Donald Trump’s inauguration, particularly for those closest to him and most accustomed to his agenda. Positions held within the Trump administration are beginning to seem less permanent than even the president’s most flippant (and almost always, later-contradicted) claims, as the latest firing of former Secretary of Homeland Security, Kirstjen Nielsen, has positively affirmed. Akin to the host of previous expulsions, the implications are as complicated as the spelling of Nielsen’s name and hold telling insights. Here are a few aspects of what Nielsen’s departure signifies about Trump’s modus operandi, the future of the administration, and the impact this will have on the trajectory of public policy.

The most obvious consequence of this stands to be a lesser female presence in Trump’s predominantly male cabinet. Even before suffering the loss of Nikki Haley and Omarosa Manigault, the overwhelmingly male entourage had already seemed to desperately lack female influences and policymakers. Although Nielson never proved herself to be the most intersectional or having carried a feminist agenda, her resignation still deals a heavy blow to any hopes of equalizing the sex-based imbalance in the president’s choice in officials. In fact, the Trump cabinet is now down to three female members, with women taking up only 13% of positions. Given Mr.Trump’s sexist past, this move seems precarious, especially before an election for which he must appeal to a female voter base that is already losing faith in him.

The more controversial issue at hand, however, is whether there will be anyone left to stand up to Trump and rein in his spontaneity and whim-based approach to policy. Having worked as a Homeland Security aide for the Bush administration and later, an official for Transportation Security Administration, it’s no question that Nielsen was experienced and commonly deemed to be one of the few adults in the room. The biggest debate so far has been about the nature of Nielsen’s tenure. While some saw her as a restraining force, who had always treated the president’s objectives with apprehension, others were quick to criticize her legacy of playing a vital role in undertaking the zero-tolerance immigration policy which resulted in thousands of children being separated from their families and kept in cages, alongside many other hawkish immigration legislations targeting vulnerable migrants, like restricting the number of people allowed to seek legal asylum via legal points of entry. She also oversaw the famously lackluster recovery initiatives in Puerto Rico after Hurricane Maria, which had a baffling death toll surpassing 3,000.

Whether she acted primarily as a henchman or a countervailing opposition remains muddled, but what is clear was her distinguished level-headedness in realizing the administration’s limitations. On various occurrences, Nielsen had thwarted Trump’s most daring proposals, evident in rejecting his numerous demands to cut off foreign aid to Central American countries (though this decision falls largely out of her jurisdiction), or deeming his idea of refusing all asylum seekers by closing points of entry to be, according to the Times, “ineffective and inappropriate”.

In an administration ran by someone so uninhibited by laws, his own aides, and certainly his sense of presidential duty, Nielsen was one of the few checks-and-balances serving a stark reminder to Trump that even his powers are finite. Evidently, she was one of the few people brave enough to stand up to him, even after many of her predecessors, such as Jeff Sessions, Rex Tillerson, and James Comey have been penalized for doing so. 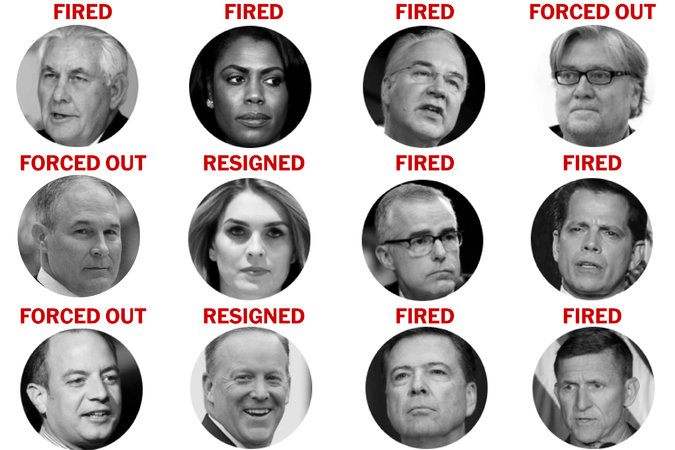 Nielsen’s firing also signifies the dangerous direction of American foreign policy, for Trump initially clashed with her on immigration almost a year ago, accusing her of not doing enough to crackdown on border crossings and legal loopholes that allowed some migrants to circumvent stringent regulations. Since then, Trump had insisted that she be more aggressive, as their relationship quickly soured over these tensions. This mounting pressure is eventually what drove Nielsen to step down, as she had felt consistently undermined by the president and as if she bore the brunt of his frustrations involving an unhindered influx of people at the border.

Given that Trump had ostensibly eliminated one of his most vocal obstacles, there is no guarantee what radical measures he may unleash next, especially following outlandish (and quickly-debunked) utterances of the country “being full”. The fear now is that Nielsen will be replaced by someone much more aligned with Trump‘s outlandishly anti-immigrant agenda, who will act with an unbridled audacity to keep migrants out of the country. This also comes as Trump withdrew his initial nominee for the acting director of ICE last week, stating that he wanted the agency to head down a “tougher” direction. Ultimately, all signs are pointing to a general air of heightened bureaucratic hostility towards migrants seeking a way into the US, which is most probably disguising a Republican campaign strategy for the looming 2020 elections.

While Nielsen did not have a spotless record by any metric, she was one of the few remaining bastions of hope for skeptics of Trump’s rogue approach to immigration, and the migrant families living in increasingly dire conditions with essentially no way out — and now, very little chance of having a way in. Her resignation is a clear-cut case study for the repercussions of trying to deter the president, and how these efforts, no matter how moderated they may be, are ultimately futile. What’s especially worth noting is the precedent that this resignation, and many others preceding it, has set, and how they all fall into a pattern of behaviour: the cleansing of anyone who is not a Trump ideologue and who dares breathe a defiant sigh.

In this article:america, immigration, kirstjen nielsen, politics, tinayong, trump administration
Up Next: