A slur, in its verb form, is most commonly defined as a word used to harm someone’s reputation by criticising them. This isn’t exactly true when we speak of slurs like the n word, f***ot or tr***ny, but it’s close enough that we still understand that a slur is clearly a bad word. It is used in a willful and purposeful verbal act that is used to damage someone, usually in terms of their reputation, but this also has significant emotional damage.

A reclaimed slur is the act of taking an oppressive pejorative, traditionally used derogatorily against a particular group of people, by the oppressed community in question and using it as a form of taking back some of the social power they have been denied.

Think of the word ‘b*tch’ and women. While today women and femmes all over the world use it as an empowering term to talk about their own independence or sexual autonomy, it is still traditionally a pejorative used by (usually) men to verbally threaten vocal women into silence. This is, however, an example of a word where we see near total reclamation and, even then, when it is used by communities that are not as impacted by its implications against those that are (AKA men using it against women and femmes) there is definite backlash experienced.

Another good example of a word undergoing reclamation is the ‘f’ slur or f***ot. The word has a long and terrible history going back to the middle ages when gay men were often burned at the same time as witch burnings happened, but unlike witches they were considered too ‘low’ for the stake and were just ‘thrown in’ with the kindling (or f***ots). However, it is experiencing a renaissance of its own. Many gay men use this term to describe themselves and each other as a form of liberation. In his popular advice column “Savage Love,” Dan Savage, who went on to start the “It Gets Better” project originally asked readers to address him as “Hey f***ot.” However, for every gay man that finds the term freeing and empowering, there are many more who find it disgusting, derogatory and downright offensive.

A third word, and another one that is becoming increasingly common in the English lexicon, is queer. Queer is used increasingly by members of the LGBTQ community as a self identifier and is used by those outside of it to as an umbrella term to designate the entire community. Despite its fraught history, this word has gained mainstream media recognition with shows like ‘Queer Eye’ achieving mainstream success.

These three words are at three very different stages in the reclamation process. Through this there are a few points that must be kept in mind when we talk about reclamation in order to fully understand it. 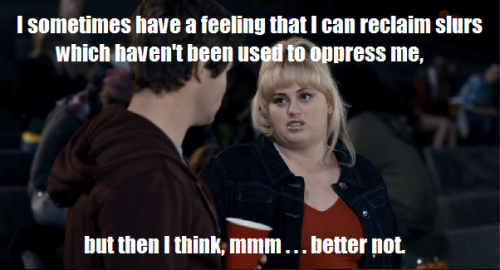 One, it is wholly up to the marginalized community in question to reclaim a word and then decide whether they feel it is offensive or not. If you are a cis het person or a woman, you cannot say that the f slur is no longer considered offensive since you do not belong to the community being disproportionately harmed by it.

Two, no individual can speak on behalf of an entire community. It doesn’t matter if one black person told you (a non-black person) that they thought it was okay for you to use the n word. If the rest of the community is telling you that they are offended by it and think you shouldn’t be using it, then you should absolutely not be using it.

Third, these words are extremely subjective. Even if words like ‘bitch’ and ‘queer’ have widespread popularity, if someone disenfranchised by one of them tells you not to use it, then don’t.

And finally, as with anything, it’s about sensitivity and respect. It’s about understanding that some people may find something offensive and other people may not because these words can cause such different and polarizing reactions based on someone’s history with them. It’s about understanding that if you do not belong to the marginalized community in question, you can never understand their struggles or define their experiences to them, but you can absolutely be a better ally by listening and remembering that you are absolutely not the authority on someone else’s life struggles.

Gender in Sports Needs to be Redefined

Tanvi is a student at Ashoka University, currently pursuing her BA in Sociology and Anthropology