“The slap of the century” is how Palestinian president Mahmoud Abbas responded to President Trump being involved in a peace plan between Israel and Palestine.

Trump released a peace plan on Jan. 28 that would be more supportive of Israel than Palestine. In it, Trump proposed a two-state solution, which means that Israel and Palestine would be two states living side by side with conditions.

The history of Israel and Palestine is both long, muddled, and a common cause of confusion. The area that’s known today as Palestine has always been a place where Jewish folk and Arab folk have fought over. Historically, Jewish and Arabic people have lived in this area and have faced conflict over who the land truly belongs to. After World War I, Britain assumed control over Palestine. In 1917, England recognized the Balfour Declaration which called for Palestine to be a home for Jewish people. In 1922, the League of Nations mandated Britain to establish a Jewish homeland that invited Jewish folk to settle in Palestinian land.

In 1936, Britain created a commission to examine the tensions between Arabs and Jews which called for a separation of the land (a two state solution). After World War II, the desire for a homeland for Jews intensified. The United Nations recommended in 1947 a state of Israel and a state of Palestine. In 1948, the United States and other powerful countries recognized Israel as an official state.

After the 1948 Israel-Arab war and the Six Day War in 1967, Israel took more Palestinian land as well as the Sinai Peninsula from Egypt and Golan Heights from Syria. It has been estimated that 1.9 million Arabs live in Israel and 2 million Arabs living in Gaza strip which is ruled by Hamas. Hamas is a militant Islamic Palestinian organization, and has been deemed by many as a terrorist group- which means all the Arab residents living in Gaza are blockaded by Israel’s military. Another point of contention is the West Bank, officially Arabic land but has Jewish settlements on it and is ruled by Israeli military.

This map from the Palestine Liberation Organization-Negotiations Affair Department show how much land Palestine has lost and further how more they will lose through President Trump’s peace plan. 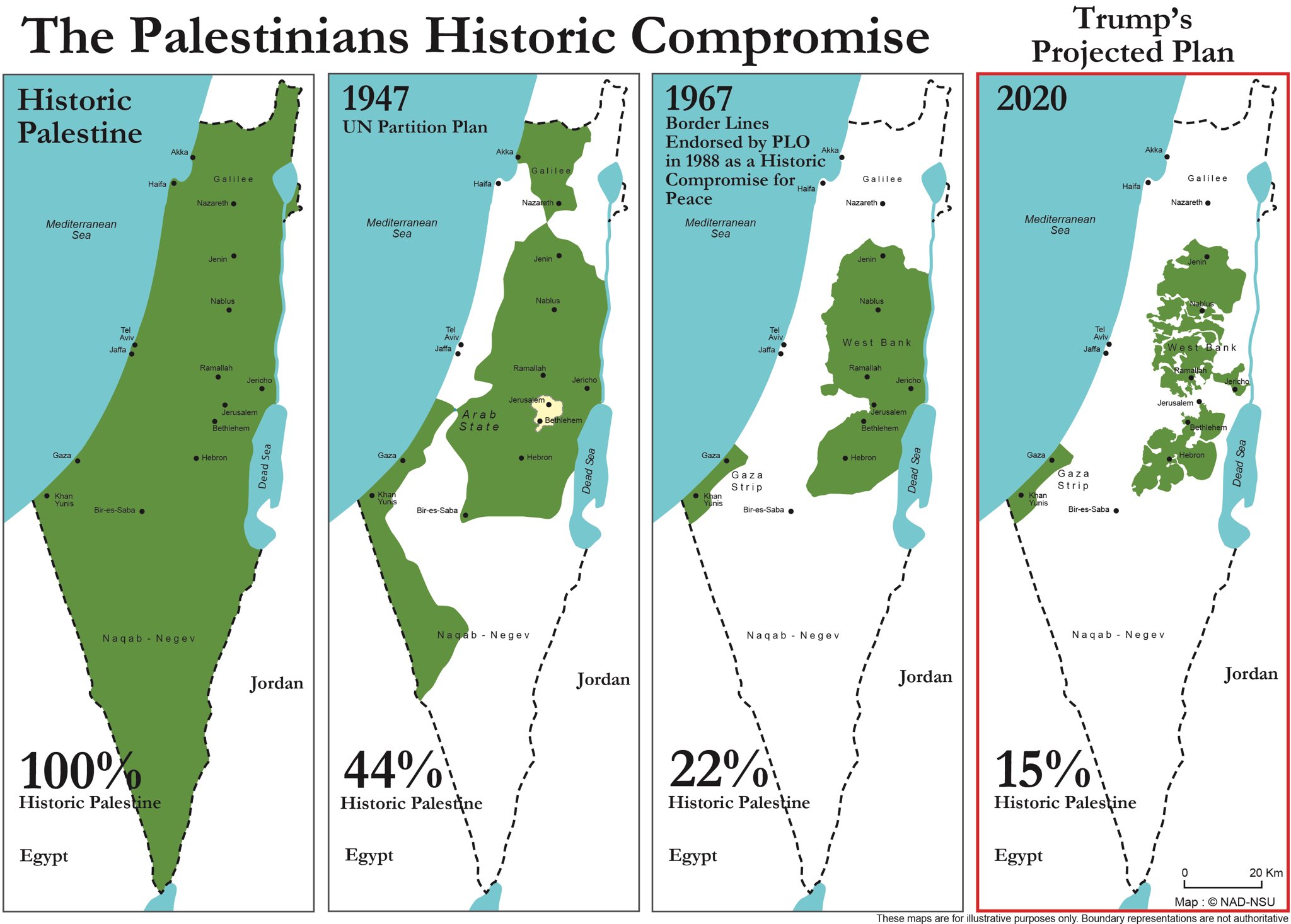 Trump’s peace plan consists essentially of pushing the Palestinian capital to the north and east of East Jerusalem. There is already a concrete wall in place after an Arab-Israel conflict, and will serve as a boundary. The Palestinians would have Kufr ‘Aqab, Shuafat refugee camp, and Abu Dis, and would have the name al-Quds or “Holy One” which is not meant for Jerusalem’s villages but Jerusalem itself. The use of al-Quds is important because it signifies that Jerusalem’s status as a capital for Palestine is over.

Palestinians immediately rejected the proposal, which President Trump released at the White House with Israeli Prime Minister Benjamin Netanyahu by his side.

Palestinians instead call for keeping Jerusalem, already tense with Trump after U.S. pulled aid from the U.N. Relief and Works agency that benefited Palestinian refugees, stopped aid to Palestine altogether, closed Palestinian diplomatic relations in Washington (the U.S. has not been in contact with Palestine for two years), recognizing the Golan Heights as Israeli territory, moving the U.S. Embassy from Tel Aviv to Jerusalem and naming Jerusalem Israel’s capital.

Palestinian President Abbas in response to this deal has officially severed off all ties with U.S. and Israel on Feb.1, even on security cooperation. There have been protests since this peace deal has been released to the public.

"#Jerusalem is ours and it will remain ours!"

Protests were held in different parts of #Turkey against the Trump`s Peace plan for #Palestine and the silence / inaction of Muslim rulers across the globe.

Let’s Not Be Racist With The Coronavirus

How The Iowa Caucuses Failed