Women’s rights and youth activism, both in America and around the world, have become a hot topic in 2020, and it’s easy to see why. From Harvey Weinstein’s conviction to women outnumbering men in the workforce for the first time since the Great Recession to Greta Thunberg’s speeches at the World Economic Forum, progress is being made in amplifying women’s and young people’s voices and ensuring that they’re being listened to. Plan International USA (Plan) want to take this one step further, hosting a campaign aimed at young women and the work they’re doing to further female empowerment.

Vote for the G.O.A.T. is the campaign Plan has created, aiming to highlight the achievements of young women and their activism. Starting on March 11th, people can nominate anyone they feel is making a difference, whether it’s someone in their community, an influencer they follow or someone they’ve read about – anyone they feel has done significant work regarding topical issues in women’s equality, with the goal of amplifying young voices that have previously been overlooked.

Embracing a community-style campaign, individuals can vote as many times as they want, allowing people to vote for as many of the nominees as they want. The campaign wants to highlight the amazing things being done by all of the individuals nominated, and through this voting model, they hope to encourage people to vote for a wide range of individuals, along with following up on their work and seeing the amazing things these people are doing for their communities.

Community is at the center of the Vote for the G.O.A.T. campaign, with Gifts of Hope adding another incentive to get involved. For every 500-1000 votes a nominee gets, a real goat will be donated to a family in Indonesia, providing the families with a source of income and financial stability that they’d otherwise be lacking. Along with this, there are additional Gifts of Hope granted on behalf of the nominees who progress to different rounds that are aimed at encouraging confidence, education and empowerment in young girls worldwide. Plan intends to use its platform in the US to further the cause of empowerment for young women everywhere, an admirable goal and a key part of what makes this campaign so significant.

There are four categories that people can enter into: Visibility and Representation, Equal Opportunity, Women’s Health and Combating Gender-Based Violence. One of the key aims of Plan is to make the campaign intersectional, both in terms of the nominees and the causes it’s championing, and through these categories, they’ve covered that. From gun violence to HIV/AIDS to education access and representation to reproductive rights, all of these things can relate back to gender inequality, and through the choice of categories, Plan has highlighted the diversity within the women’s movement, not only serving to amplify voices but also to raise awareness of the sheer variety of issues facing women today.

The prizes being offered by Plan are nothing to scoff at either. For the ultimate G.O.A.T., they’ll be invited to speak at an upcoming Plan Youth Advocacy event about their work, giving them a platform to get their voice (and their work) more widely broadcasted. It acknowledges the hard work of these individuals who are often ignored in favor of famous names and really aims to bring attention to grassroots voices who do so much for their communities.

To encourage participation, there’s also a prize for the individual who votes the most throughout the bracket. They will win a prize of an all-expenses-paid trip to Plan’s Youth Leadership Academy over the summer. This provides a great opportunity for young people to engage with Plan and the social issues being faced throughout the country, along with how to lead communal change. Through this, Plan hopes to encourage the next generation of leaders through their support for those already making inroads into gender-based issues within their community.

Plan as an organization has made it clear that Vote for the G.O.A.T. is to be an inclusive campaign focused on community and progress, with competition being a far less important part of what they hope to achieve. It’s all about promoting young women and amplifying their voices, giving them an opportunity to be heard. Young people have helped to make this campaign what it is, with college students like Vishwa Padigepati working on the Youth Advisory Board and working with the larger organization to create real progress.

Around 600 girls, boys, parents, teachers, community leaders and government officials attended the launch of the Safer Cities for Girls programme in the Philippines.

And this couldn’t have come at a better time. Women are still significantly undervalued, with a recent UN report finding that 90% of people hold some sort of bias against females, and no country in the world has gender equality. In 2020 this is shocking and serves to show the significance of organizations like Plan – without loud and active voices speaking out against gender imbalance, change simply won’t come.

There’s always work to be done, and a survey undertaken by Plan asking young people between 10-19 about their view on gender equality demonstrates that, while people believe in the concept, stereotypical gender roles still dominate everyday life. While change is coming, it’s taking its time. Plan’s main goal with this campaign is to highlight the significance of young people and their work, treating it not just as a spectacle but something to be respected, and allowing an opportunity for real gender-based change, led by women. They want to offer young people a seat at the table and allow us to engage with the adults in the room to ensure that our voices are heard as equals and not as children throwing tantrums about a new fad in activism.

Overall, Plan aims to build its aid from the ground up, ensuring it has a nuanced cultural and circumstantial knowledge base before operating in different communities. It aims to listen to the people its work will affect and asks for input from various agents and constituents. They care about the people that they’re working with, and that comes across in their goal for this campaign. It’s all about community, collaboration and a genuine desire to change the world for the better.

With activism in young people emerging on a massive scale and significant movements like #MeToo, women’s voices are being highlighted in a way that’s practically unheard of. We’ve just got to make sure that the next generation of activists are being heard and supported, and Plan has every intention of ensuring that through the Vote for the G.O.A.T. campaign.

So make sure you’re getting involved, nominating those who you think deserve to have their voice amplified here. Nominations close March 29, and voting begins April 6, so get involved and make sure that your voice is being heard. 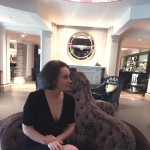