Venezuela has been struggling with financial strain and political uncertainty since 2013, with the election of President Nicolás Maduro after the death of President Hugo Chavez. Inflation and scrambled oil markets lead to the accumulation of a crushing deficit. “They didn’t save up for a rainy day. They didn’t make the long term investments,” said Paula Garcia Tufro, Atlantic Council deputy director, in a statement to Al Jazeera. With the economic decline of the nation, Venezuela’s government began to fall into disarray.

Over 4 million people have fled Venezuela as of 2020, which the United Nations (UN) has deemed the largest exodus in “the recent history of Latin America and the Caribbean.” A collapsing oil exportation market paired with a lack of financial independence in the country, has arguably led to the discontentment. Ricardo Hausmann, a scholar of Harvard’s prestigious Kennedy School of Government and a former president of the Inter-American Development Bank (IDB), described this as “an attack on the invisible hand, or an attack on basic economic rights.”

Maduro was reelected in 2019, though many found his election to be fraudulent. This led to massive uprisings in Venezuela. Citizens protested not only Maduro, but a lack of medical care, food and basic amenities. Juan Guaidó, a member of the Popular Will party and the head of Venezuela’s National Assembly, which is led by the opposition party, announced that he was rejecting Maduro’s return to office and would instead be claiming an interim presidency. This was fully legal for Guaidó to do, as the National Assembly can instate an interim president in the case of a proven illegitimate election, according to Venezuelan Constitution Articles 233 and 333. Guaidó was slowly accumulating international backing, but after he was publicly dragged out of a moving car by authorities, his political power was seemingly unstoppable.

In 2020 the deadly protests had been quieted and Maduro maintained that he was the president. Guaidó was recognized by over 50 nations as the president of Venezuela, and is still very interested in solidifying his international image. Guaidó defied a travel ban imposed upon him and attended the U.S. State of The Union (SOTU) speech as President Trump’s guest after a two-week tour to meet with heads of state in Canada, Colombia, France, Germany and the UK. Guaidó even gave a speech at the World Economic Forum in Davos, Switzerland. In Miami, Florida Guaidó declared, “We have a plan. We have a strategy. We’re not alone, and we’re going to restore democracy.”

“Operation Gideon,” went into action in Venezuela in May of 2020, and it appears that the “plan” and “strategy” were both deeply flawed.

50 hires and two former U.S. special force soldiers were captured by Venezuelan forces on Monday, May 4, 2020. According to the Associated Press, a total of six men were killed, though Venezuela claims eight. The ex-soldiers were Luke Denman and Airan Berry, as proven by passports they were carrying. This had all been organized by Ex-Green Beret Jordan Goudreau, who had conceived the mission. His original plan was that these U.S. firm-backed forces would move throughout Venezuela to usurp control of oil regions and key buildings. According to documents and the Washington Post, these forces would, “engage government security forces, as well as the motorcycle- riding, pro-Maduro gangs known as colectivos and Colombian guerrilla groups operating on Venezuelan soil.” None of that happened.

Soldiers were live tweeting their invasion and Goudreau, the mastermind, released videos in the days leading up to the attack boasting about the plans. Authorities in Venezuela were alerted to the presence of the incoming soldiers, allowing them to immediately intercept them. 25,000 Venezuelan operatives rushed to the coasts. Goudreau and former Major General of the Venezuelan National Guard, Clíver Alcalá, had met in Colombia’s capitol city of Bogotá to plan, prior to the operation. Maduro stated that by this point they were already alerted to the scheming, “We knew everything. What they ate, what they didn’t eat. What they drank. Who financed them.”

State television broadcasted the captives, deeming them terrorists. This footage taken by the Venezuelan soldiers revealed that Denman admitted that he was there on a mission to capture Maduro and to make $50,000 to $100,000 in training. This training occurred in Colombia, and only included two other U.S. employees. One of the preemptive operation videos from Sunday, May 3, 2020 confirms that Denman and Berry were both employed by Goudreau. Goudreau has been obsessed with the idea of “liberating” Venezuela, and maintains that the forces sent in were not there to kill. Goudreau had been contacted by Drew White, another former Green Beret, and they launched SilverCorp in 2018. SilverCorp was not originally started to deal in international issues, they launched to offer schools military-grade protection from school shooters. Their firm didn’t find success, and Goudreau decided he wanted to diversify their reach.

Goudreau told White about his wish to secure oil fields in Venezuela, in August of 2019. White said he coordinated meetings with investors, but that Goudreau began to pitch a whole new plan in the meetings – Goudreau wanted to remove Maduro from office. White said no one wanted to go along with it and that “the assumption was that it would just go away. It never seemed actionable. It never seemed like anything real.” Clearly, it did not go away.

Goudreau claims that he was working with Guaidó on the operation. Goudreau’s story begins to entangle Guaidó in 2019. Goudreau had worked security at a Live Aid event held for Venezuela in Florida. SilverCorp wrote on Instagram, “Controlling chaos on the Venezuela border where a dictator looks on with apprehension,” along with a photo of Goudreau at the event. The motives of the mission are foggy, but the financier is a slightly cloudier subject. Goudreau insists that Guaidó’s team was going to pay for the mission, “but in the end they didn’t.”

Guaidó was not opposed to gaining power unconventionally or with force, as he had just called for a military uprising on April 30, 2020. Venezuelan opposition had reportedly agreed to pay $213 million to SilverCorp. A 42-page document outlines details of the operation. Drop off sites, supply depots, landmines and other details that failed to reach fruition can be found in the lengthy document, but the report also states, “Service Provider Group will advise and assist Partner Group in Planning and executing an operation to capture/detain/remove Nicolas Maduro (heretoafter ‘Primary Objective’), remove the current Regime, and install the recognized Venezuelan President Juan Guaido.”

This document was signed by the Venezuelan defector Sergio Vergara and Goudreau, as well Guaidó’s adviser Juan Rendón. Rendón admitted that he did sign an “exploratory” document, but that soon after the initial agreement was made, their relationship soured. He claims that Goudreau began to act without reason and lost all support of SilverCorp’s previous claims. There was no financial backing or 800 men available, and Goudreau allegedly demanded $1.5 million. Rendón explained that he transferred Goudreau $50,000 but they soon reached a breaking point and cut off contact. Rendón said he assumed that the project was no longer on the table or going into action. Rendón stated, “I thought, are these guys crazy? They were blackmailing us [for the money]. I thought, wow, are you really going to take it this deep?” 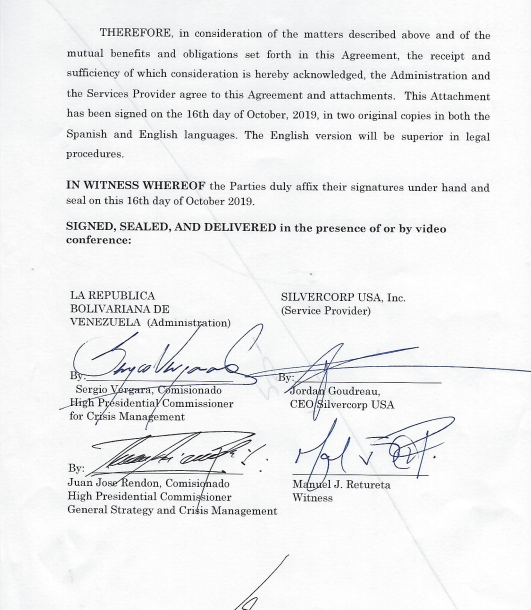 Some fingers have been left pointing at the White House. Speculation suggests that Goudreau could have been encouraged by a reward offered by the U.S. government for Maduro’s arrest.  The Trump administration had charged Maduro with drug trafficking and money laundering, offering up to $15 million to those who presented him to U.S. authorities. The Trump administration had become involved in the situation in Venezuela very quickly in 2019, and appeared to still be invested in proving the legitimacy of Guaidó, especially after the SOTU where Trump invited Guaidó, then used him to attack socialism and made it clear to the world that the Trump administration still opposed Maduro (Maduro and Trump are on very poor terms with each other, actually).

Venezuela has the largest oil reserves of any nation in the world, with a staggering 300 billion barrels (for comparison, the nation in South America that is second most abundant in oil barrels is Brazil, with 12.84 billion barrels). This is appealing to the United States, a country that’s rarely shied away from involving itself in regime changes for financial or political gain. The U.S. had pledged unwavering support to Guaidó, even leading to drama at the Venezuelan embassy in DC (after 36 days, the last of the protesters were removed by federal agents during a raid). US officials deny any involvement in the operation, but the language is legally protective. Goudreau texted Rendón in October, “Washington is fully aware of your direct participation in the project and I don’t want them to lose faith,” according to the Washington Post. Goudreau also reportedly tried to contact the Vice President’s office, with no success. Secretary of State Mike Pompeo stated, “There was no United States government direct involvement.”

In John Bolton’s book “The Room Where It Happened,” he writes that Trump said that it would be “cool” to invade Venezuela. Bolton also outlined Trump’s waffling support of Guaidó, which lead to flip-flopping from other world leaders, and highlighted the instability of U.S. relations with Venezuela during this period.

Image via the Daily Mail

Goudreau and other officials remain at large, though he has been charged with arms and drug trafficking. Alcalá turned himself over to authorities in Colombia, as he had also been charged by U.S. authorities with drug trafficking in March (along with Maduro). Full responsibility for the situation remains unclear at this moment, but some fear that this will only amplify Maduro’s power grabs.

On June 16, 2020 Venezuela’s Maduro-loyal Supreme Court took over the two biggest opposition parties in the nation, rendering them nullified. On July 7, 202o the high court seized Guaidó’s Popular Will opposition party, which currently controls the only challenging legal body in the nation, the National Assembly. Maduro and the courts are insisting on holding legislative elections in December, though political opposers have stated that they will not be participating, citing rigging. A number of parties, including Popular Will, have been blocked from participating in the election. There is suspicion that Maduro will keep these parties on ballots and count the votes for his own, after rearranging party leadership and re-registering the party with the courts. Party leaders have shared that they fear citizens will cast votes for now-defunct groups. The press is primarily state-controlled, as Venezuela is ranked 147 out of 180 nations by Reporters Without Borders Press Freedom Index, labeling them in the “Difficult Situation” category. This can make it a struggle for voters to be fully informed.

“They want to make it quite clear that Guaidó is history,” stated Phil Gunson, an International Crisis Group analyst. Guaidó is using his recognized presidency to protect himself domestically and internationally, but if he no longer has the law or his own party to bolster his office, can Guaidó still be seen as Venezuela’s president?

Labeled “so mind-bogglingly dumb,” by a former Navy SEAL, Operation Gideon will not only go down in international history as one of the least successful attempts at overthrowing a government, but its implications leave concerns and pressures high.