Inslee grew up in Seattle Washington, where his father was a high school teacher and his mother, a sears sales-rep. He attended the University of Washington as an undergrad student, and then Willamette University for Law School. He worked as an attorney and then a prosecutor for several years before he became involved with grassroots organizing. His activism began when he became involved in the fight against funding cuts for rural Washington Schools. This activism led him to run for a position representing Washington’s 14th district in the State House, and in 1992, a seat in Congress. Inslee later moved to the Puget Sound area and was reelected to the House where he served until 2012. That year he stepped down to run for Governor, a race which he won. He was reelected in 2016 and has held the position since. 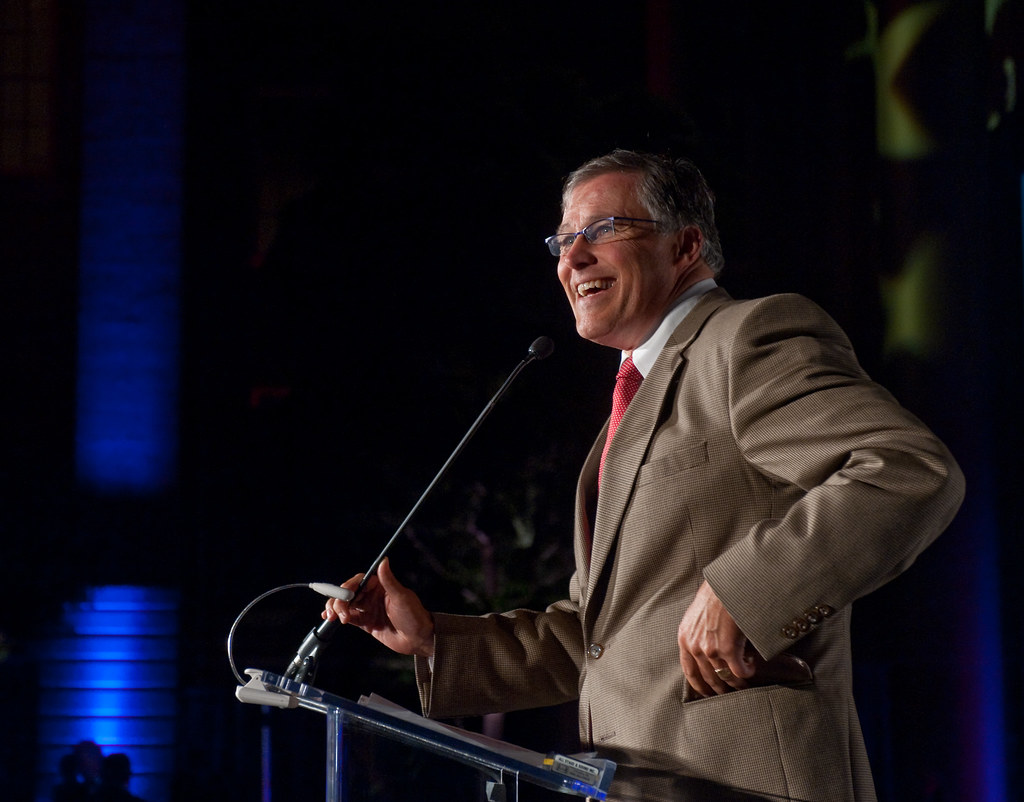 Jay Inslee speaking at the “Evening with the Stars of Energy Efficiency” dinner in 2010 Source: Jay Inslee Flickr

Inslee is running on the issue of fighting Climate Change, which he says will be his first priority if elected. With that, he focuses on the economic impacts of a greener future, saying that “climate change is not more important than the economy; it is the economy.” Inslee’s platform is based on four climate-centred promises: completely eliminating greenhouse gas emissions, a transition to exclusively renewable energy sources, focusing on job creation around clean energy in American communities, and banning subsidies from fossil fuel corporations. He has also indicated that his policies as Governor of Washington would follow him to the White House.

Inslee has solidly left-wing voting and policy record. He has always been an abortion rights advocate, voting against resolutions that would restrict access to abortion and receiving a 100% approval rating from NARAL, a pro-choice advocacy organization. Inslee’s voting record on civil rights includes voting to expand protections for LGBTQ Americans while voting against a resolution that would have made the Patriot Act Permanent. Inslee has also voted in favor of bills which increase alternative energy funding and restrict fossil fuels.

Executive order 14-04: Washington Carbon Pollution Reduction and Clean Energy, which Inslee passed as Governor, is an outline of steps to propel Washington State towards carbon neutrality. Inslee has increased the number of Electric Vehicle charging stations in WA. The state now ranks third in the country for the greatest electric transportation accessibility.

He also propelled the state to a top-three rank in renewable energy through increases in Solar and wind energy production, as well as a $76 billion dollar clean energy spending budget and a mandate that all new energy projects be subject to greenhouse gas impact assessments. He co-founded the U.S. Climate Alliance, which is a coalition of 23 governors, committing to implement the goals and steps of the Paris Climate agreement on a state-level.

Inslee has mandated full-day kindergarten in WA as a part of a bill that increases state funding for education. He also increased funding for public universities, which, in 2015, made WA the only State that lowered higher education costs for all college students. He created the program Career Connect Washington, which connects youth with professional development opportunities such as apprenticeships and mentors.

Inslee’s Governorship saw the passage of one of the most progressive paid family and medical leave bills in the country, which guarantees the state’s citizens up to 12 weeks of family and medical leave every year with employees receiving up to 90% of their normal salaries. In March of 2018, Inslee signed the first State Net Neutrality bill in the country. He also passed the Equal Pay Opportunity Act, which guarantees equal pay to all Washington residents regardless of gender,  a State-wide DREAM act, which increases access to higher education for undocumented immigrants, and a Voting Rights Act.  This act repeals the requirement of a social security number in voter registration. Inslee banned conversion therapy in Washington and introduced the Marijuana Justice Initiative, which grants pardons to people previously convicted of Marijuana possession before the drug’s legalization.

In 2014, Inslee placed a moratorium on the Death Penalty in Washington State, citing racial prejudice in the judicial system as a reason for his decision. Inslee has been outspoken on the issue of gun control. After President Trump proposed arming teachers in the wake of the school shooting in Parkland, FL last year, Inslee confronted the president on live television. In 1994, he lost his House Seat after voting in favor of a bill that would have banned assault weapons.

Inslee’s biggest weakness may be his anonymity. In a field of Democratic candidates who are party staples, Inslee doesn’t have the base support that many others do. Inslee’s age (68) may also be a limiting factor for some voters. According to Axios, the majority of Democratic leaders in Iowa would prefer a young candidate. Inslee has also received some criticism for accepting money from the Super Act Now On Climate especially as many democratic candidates are vowing to reject corporate and PAC money and rely on crowdsourced funding.

As a candidate, Inslee is fairly unknown. A Morning Consult Poll saw Inslee ranked last among 2020 Democratic Candidates. This was in February, and it is possible that he has gained support since then. He recently received $1 million dollars from the Super PAC Act Now On Climate. Because he is running on the issue of climate change, Inslee’s electability is closely linked to American’s view of climate change as a pressing issue. According to the Gallup Institute, only 53% of registered voters identified a candidate’s position on climate change as a factor in their vote during the 2018 Midterm elections. However, with the emergence of the Sunrise Movement, which is at the forefront of rising youth climate activism, as well as the introduction of the Green New Deal, the issue of climate change is gaining public recognition.

In his recent Washington Post Op-Ed, Inslee wrote: “We are the first generation to feel the sting of climate change, and we are the last generation that can do something about it”.

In this article:Candidate, Jay Inslee, presidential election
Up Next:

Facebook Is Widening the Gap Between Conservatives and Liberals

Us and Them: Love Drives Out Hate