[dropcap]I[/dropcap]ndonesia is a country located in South east Asia. This country has an estimated population of over 260 million people , and is ranked fourth of the world’s most populated country. For the past 15 years, Indonesia has been facing a lot of social problems, nationally and internationally. Problems such as political instability, unrest and armed conflict, human rights violations, corruption, nepotism, collusion, scandal, and poverty still remain unsolved.

Those problems against women are what makes the Jakarta Feminist Discussion Group initiated the first ever Women’s March in Indonesia’s capital city, Jakarta on March 3, 2017.

I’m lucky enough to get a chance to interviewing one of the leading figures behind Women’s March Jakarta, Anindya Restuviani. She’s a Youth Advisory Panel of Indonesia United Nations Population Funds (UNFPA) and member of Jakarta Feminist Discussion Group.

Who initiated the idea for Women’s March Jakarta?

This idea is started by Caroline Monteiro or many known her as Olin, but the initial discussion took place in a group called Jakarta Feminist Discussion, and starting from there, we gathered some volunteers that most of them are members of the group. But later on we had wide range of volunteers that came from many different background.

How did the march go? Was anything interesting happened during the march?

It went very well. We did not expect that much of the crowd will show up, our initial estimation was only around 400-500 people, that’s based on confirmation we received, but at the end, there are at least 700-800 people joined the march. It’s interesting that people who showed up is very diverse, there are many many teenagers attended the march, which actually is something that we really hope for.

What are the goals that you wanted to achieve from this march?

As you may know that we have 8 issues that this march is demanding for, and I believe all of them is inter-sectional to the issue of inequality faced by women and marginalized group in Indonesia, and I also believe that we choose these 8 issues that is mostly related to Indonesian context, as well as based on data that we and affiliated organization have. But for specific goals that we wanted to achieve are mainly 2 things :

first to the government to stop neglecting the fact that Indonesia is not immune to racism, inequality, etc and demand them to do something about it, and second to raise the awareness among society where they tend to be ignorant to such issues. 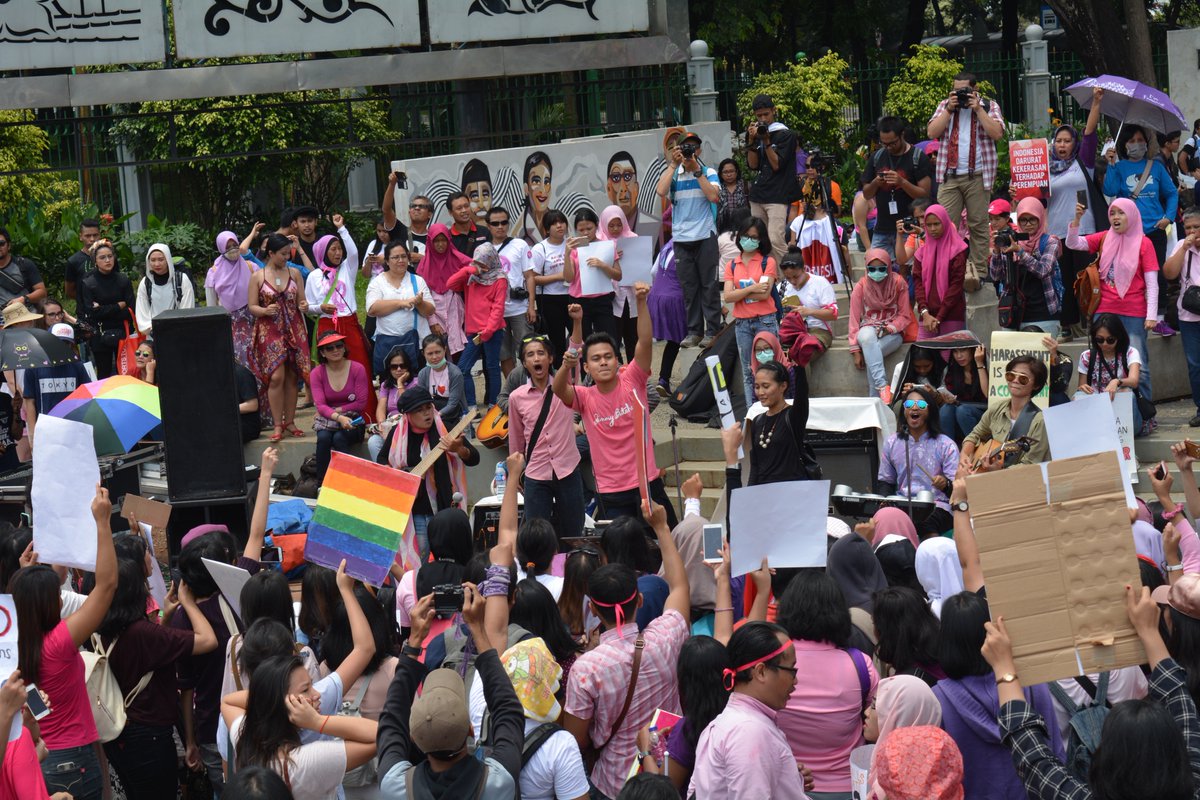 Could you explain about Jakarta Feminist Discussion Group? What they do? Etc?

It’s basically safe haven for feminist in Indonesia, or mainly in Jakarta to be able to discuss issue about feminism to like minded people. There are some activities too such as discussion, books club, movie screening etc.

Do you think Indonesian Government has done a lot regarding Women’s Right and Equality in Indonesia?

Well there are many progress for sure, but I personally feel that the implementation are still behind. Women’s issues are still lacking of attention from both government and society.  In politic for example, Indonesian law regulated that at least 30 percent of female representation in legislative body, but by far it’s only less than 20% in the legislative body. The law itself is still sexist, there is this judicial review that will criminalized consensual out of wedlock sexual intercourse that is currently on going, which I personally feel will disadvantage women. We are also still trying to push for the government to legalized the anti violence against women’s law that has been on ongoing review for years.

Issue of reproductive health, child marriage, FGM are also still lacking behind. In terms of education,even though progress has been made to access universal education, but stigma towards young women role in cultural beliefs is still very strong so most of the time young women are the most vulnerable on. All of those issue are very inter-sectional with women with disability, trans women, and many other marginalized group. So yeah, we still have sooo many things to do to achieve equality, that’s why I feel it’s the march role to raise the awareness to society.

Is this Women’s March gonna be the only action? Or will there be any upcoming march in the future?

Not necessarily. This march is one of many actions take place for International Women’s Day that will happen on March 8, on March 8 itself there will be another march but specifically for domestic and migrant workers issue. In addition we will have some follow up actions after the march including sending out formal letter to the president and the government, and discussions, expo or other platform since we see huge enthusiasm on feminism issue. 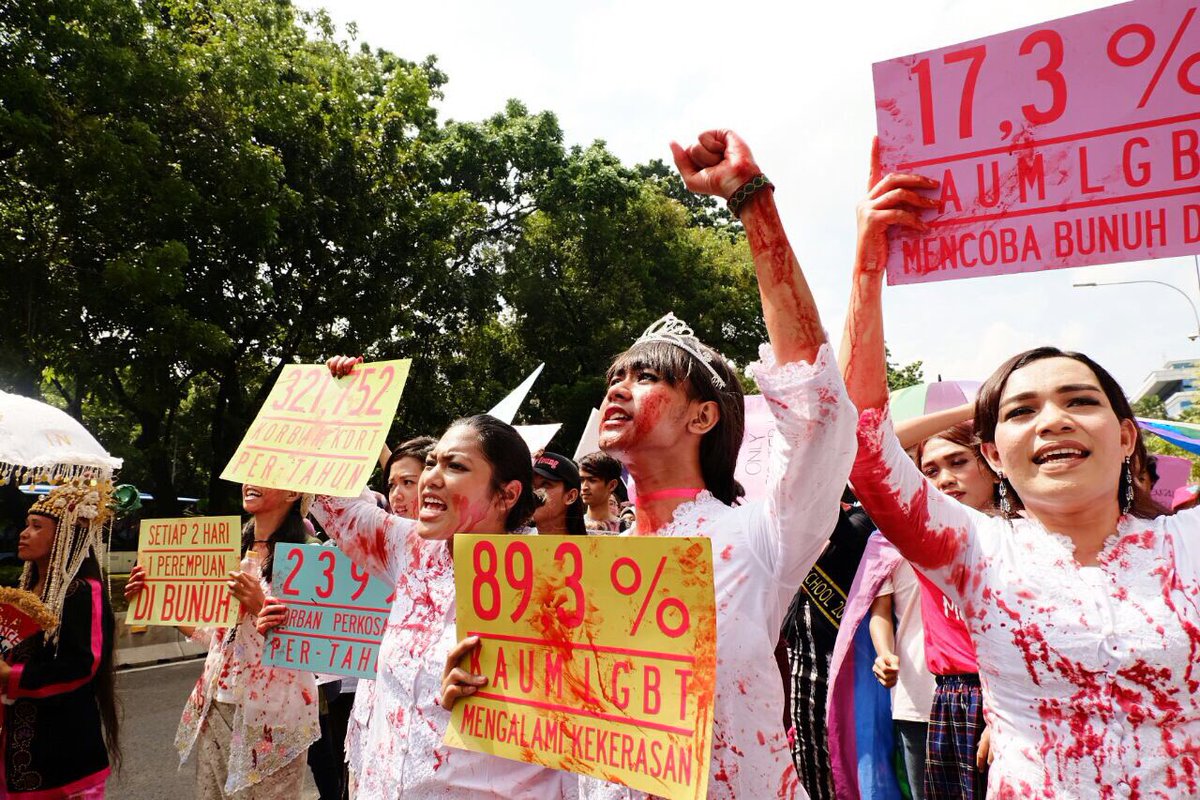 During the march, was there any attacks from a hate group/certain religion extremist group? Since you’re also marching for LGBT rights?

Surprisingly, and thankfully no. There were no much backlash from anyone prior to the march. It was probably because they were not very much aware of what the issue are, since it’s called women’s march and people are some time too lazy to read the full context so they are not very aware that we are also marching for LGBT rights. However, after the march, once the media started to publicize our march then the backlash are coming in. But again, it was not up to the extreme level of someone threatening us, most of them are just comments on social media or comments from relative or someone that we know personally.

How to encourage women to speak up more about sexual harassment/abuse that happened to them?

Do you think teenagers who have concerns about social issues like feminism, human rights etc are too young for that? Since teenagers are rarely heard by adults

Nobody is too young to have concerns about social issue, in contrary we really wanted to encourage them to have empathy and sympathy about human rights issue as early as possible. But yes, there will be challenges, as I am also working in youth participation, I see many stigma among youth. Hence,the follow up action of women’s march would like to involve teenagers as much as possible so they have platforms to be heard.

Lastly, do you have any words for all women in Indonesia ?

I  just wanted to tell all women in Indonesia to be proud of who you are, that we deserve the same opportunities, the same chances as our peer male friends. Do not let anyone tell you that you are less than anyone else. But we also need to stand in solidarity with others, since we still have so many works to do.

In this article:asia, equality, feminism, human rights, Indonesia, Jakarta, womens' march
Up Next:

Racism Against Asians Is Still Racism

What It’s Like To Be Mentally Ill in India

A thespian who really love musicals and international issues. You would find me either reading books, writing, or reenacting scenes from broadway musicals in my spare time