The Race to Change TV: Why Diversity in Pop Culture Matters

New York City. It’s one of the most diverse cities in the world, yet the cast of Friends seemed to live in an all white world. Friends is typical of mainstream television programs, which rarely feature people of color. According to a video by Buzzfeed, which analyzed a “brief history of television,” the most popular shows over the past 60 years have featured 45 Caucasian people, and two people of color.

This lack of diverse representation has a detrimental impact on our society. For people of color, this erasure of their presence in popular media has led to feelings of invisibility and marginalization. Growing up, young girls of color see, almost exclusively, images of porcelain-skinned, blue eyed, and usually blonde-haired women as the ideals of beauty — ideals girls of color can never achieve. At the age of four, I stood in front of the mirror, pulling my ringlet curls as straight as they would go. All I wanted was to look like Hannah Montana.

This lack of representation not only creates a dysphoria between girls of color and their appearances, but it also implies that their unique beauty is not valued. According to the makeup of the United States, over 30% of the population is made up of people of color. Based on those statistics, modern television shows should have more diverse main casts, in order to reflect the reality of our society and validate people of color as viable citizens.

Since television’s early years, people of color have had to deal with issues of misrepresentation: for the most part they were invisible, but when they were shown, they were stereotyped and degraded. Women of color appeared on screen as maids and mammies, while men of color were either clowns or criminals. These stereotypes persist today. On television, black and Latino men are often seen as drug dealers and felons, or else they are comical figures. Latino women still show up as maids, while black women are portrayed as welfare recipients — or else in tiny background roles. The range of occupations, interests, and activities of people of color go unrecognized on TV.

It would be easy to argue that because the majority population in the US is white, television doesn’t need to diversify. However, given the history of race in this country, and the problems of racism that we’re still trying to solve, television could take a role in supporting a multicultural society. Media messages are powerful, and could be agents of change. In states like Iowa, which has a 98% white population, some people’s only impression of people of color may come from television. Actors and entertainers are role models, so the creators of television shows have an obligation to support diversity. 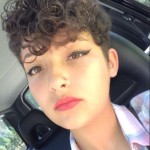 Maya Durham is an aspiring journalist from eastern Iowa. She spends all of her free time writing for Affinity, watching (and rewatching) miscellaneous shows and Bollywood films on Netflix, and going through the millions of messages in the Affinity group chat. If you need to contact her, you can tweet her @mayacdurham or email her at mayadurham7@gmail.com