America, The Cry For Change Will Never End

Freedom, liberty, constitutional rights, and the ability to bring forth change: these are some of the core ideological pillars this nation is built up upon. American history is enriched with the idea of change being a leading force to progress society, to build a better one. It is incorporated in almost every aspect of history. Millions immigrate to the United States in hopes of change. Many protest day and night to highlight the need for changes and reform. Even on a small scale, the drive for change can be found in a small child’s decision to act with kindness towards their classmate. We are a nation that takes pride in the fact that we push for a better society for the people.

In the past week, this ideology claims to be threatened. With the election of Donald Trump, many have seemed to have lost hope in continuing to bring change to the nation. In my opinion, this is the opposite of what we should be doing. If we continue to isolate the president as a separate entity and halt reform movements simply because they appear to hold no projections for success, we are essentially presenting ourselves as vulnerable to the government and most importantly, allowing victims to fend for themselves. We end up waving the white flag before the actual war begins. That not only reverses the efforts of those before but also brings great disrespect towards those who have given everything in the name of reform.

In 1968, Martin Luther King, Jr. was fatally assassinated but his efforts and progress in the American Civil Rights Movement never cease to end. In 1955, Emmett Till was brutally murdered, marking a sharp outcry for an equal society among all races. Thousands known and unknown have given or continue to dedicate their lives in the name of progress. When one of the many aforementioned passed on, their work wasn’t halted regardless of any circumstances. Similarly, why should the work of those who gave up their lives to fight for civil equality and social justice in this nation be terminated just because hopes are feeble with the election of a new president?

In fact, now is the time to fight for change because those who are threatened due to their race, religion, gender, etc. are relying on strong forces and those with privilege to lead them to equality and justice. Abandoning them out of the fear of being “next” will only bring upon an endless cycle of victims, something American society has worked so hard to change. The people of the past have done their part and now it’s our turn. Utilize their efforts along with yours and keep the progression going because it’s an extremely significant act in upholding an American value, the common man can change society.

Trump Fails To “Drain The Swamp”

When They Go Right, We Go Left 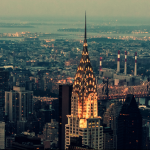