The Wax Museum of Madrid, the capital of Spain, recently inaugurated the wax figure of the new American president. As the director was welcoming it, an activist from the organization FEMEN, which intends to protect women’s rights, showed up with a naked torso and two sentences written on her skin: “Grab back” and “Grab patriarchy by the balls”. This last sentence was referring to the infamous sentence Mr. Trump has been heard saying: “Grab them by the pussy”.

Many articles have been written over Trump’s ethics and morals, but for a feminist like me, the saddest thing has always been the way he talks about women. The way he spoke about some of the girls who participated in his beauty contests is both sad and enraging. It’s disgusting how he talks about his own daughter.

The U.S. is the one country many others look up to. As a Spaniard, I always had the dream of going to high school in the U.S., and then a scholarship gave me the chance to do so during my junior year. In Texas, I found a home, but also some very twisted standards on what is expected from men and women. Even knowing this, I never thought it was possible for someone like Trump to become the president. Not after Obama.

I’m proud that a woman, tits-out, disrupted the presentation of his wax model in my country. Because we don’t want Trump being sacred and protected: we want him questioned and criticized. We want his awful sentences proclaimed, remembered, heard.

Because women protesting their rights with their bodies is an ancient technique. In Ancient Greece, the theatre piece “Lysistrata” by Aristophanes, tells the story of a group of women who denied sex to their partners until they agreed to end the Peloponnesian War and guaranteed peace for their people. In 2003, the women’s sex strike was key to sign the peace in the Liberian war.

A woman screaming “Grab patriarchy by the balls” today at the Wax Museum of Madrid would hardly make the news. A naked woman screaming this very same thing is all over Spanish news and will shortly make it to the international mass media.

We want to be heard, and sometimes this is the only way. I firmly believe the suffragettes would have never gotten us the right to vote by staying quiet. It was by breaking storefronts, screaming at the police and sometimes even getting killed that they were successful.

The patriarchy wants you to believe your feminism is okay when you are being submissive, when you are not arguing, fighting, screaming. After all, if you aren’t angry, it’s because you haven’t paid enough attention. The patriarchy doesn’t want you free. So go out and grab patriarchy by the balls.

Do We Still Live in a Patriarchy? 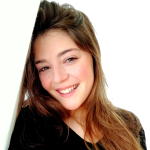 Clara is a an 18 year old Spaniard who studies to become an Elementary School Teacher, as she believes education is the only way to achieve social change. She is passionate about feminism and she's always trying to look for the creative and positive side of life.