#BodyPositivity Seems To Only Focus On White Women

*Some names have been altered to ensure the safety and overall well-being of the people interviewed.

This movement –a movement aimed at deconstructing beauty standards regarding our bodies seems to be only devoted to catering to women who in all other aspects fall under typical beauty ideals. White, light, able-bodied , cishet. average-size, conventionally attractive women are seen as the faces of the body positivity movement, leaving several other demographics including POC, LGBTQIA+ and people with disabilities out of the spotlight.

The Body Positive Organization, founded in 1966 by Connie Sobczak and Elizabeth Scott aims to “create a lively, healing community that offers freedom from suffocating societal messages that keep people in a perpetual struggle with their bodies.” These societal messages differ per demographic, which further reiterates the importance of inclusiveness.

POC are constantly sexualized. While MOC and WOC are held to different standards regarding their bodies, it is no coincidence that both standards uphold a marketable and sexualized version of themselves–POC lathered in oil, with not a single blemish in sight.

Ethnic women, particularly brown and black woman, are held to different standards concerning their bodies. Voluptuous figures are applauded, whereas alternate figures are criticized. Simply put, the ideal body for a black or brown woman is a small waist with a large bust and bottom–this body type often defines our identity. When you constantly tie these features to black/brown womanhood, you leave women (whose figures differ from this ideal) to question their own identity–am I brown enough? While black and brown women are expected to have sensuous features, Asian women are expected to have petite features, small figures, including narrow hips and a small bust, are praised.

Am I brown enough?

Similarly, this is an issue seen in the MOC community. Matthew Robinson, a Black body-posi advocate exclaims that “Black men are stereotypically expected to be muscular with washboard abs and that’s the image that’s commercialized. My image is never seen as the black male image.” Similar to Asian women, Asian men are also expected to have a lean figure. Whereas all men combat the societal message of fitting the ideal muscular and broad figure, this message intensifies for MOC as hypermasculinity plays a role.

Gale Gersten de Montelongo, a Latinx person, offers a different perspective–they describe their body as the “traditional” Latinx body: “average weight, wide hips, decent chest.” When talking about the societal expectations placed on them, they note that “Latinx people have…been expected to try and achieve the media’s image of a perfect body, despite how most Latinx are built. But because of the media’s obsession with this idea of an underweight or bordering underweight, small chested, nearly straight body, I have to look like that which is kind of impossible because of how my body is built and that’s whats it like for most Latinx people.”

The societal messages concerning POC lay on a spectrum: to conform to Western ideals or their own Ethnic ideals. Reassurance for POC, regardless of which ideal they lean towards, should be implemented in the movement that is body positivity.

With the scarce representation for the LGBTQIA+ community, the images we’re left with are only perpetuated, tiring stereotypes. “Many people already have an idea of what LGBT+ people look like,” Montelongo goes on to describe these very stereotypes, “lesbians being skinny white girls in flannel, gays being skinny white boys in polo shirts, bisexuals being confused white girls with shaved heads, trans people only being binary and wearing stereotypical gender rolled clothes.” The LGBTQIA+ community is a community filled with an array of figures – all worthy of celebrating. With the small representation allotted for trans people, they are always shown as binary trans people who wear clothes “assigned” to their gender, have undergone hormone therapy and have had their sex changed. With this small and exclusive amount of representation, it presents a one-side narrative of trans people. There is also a stigma regarding people who do go under the knife – Javaughn Young-White, an avid advocate for body positivity notes that “the movement sometimes excludes men and women who choose to undergo body modification surgery. I often see a lot of harmful undertone and microaggressions being used against surgically modified bodies by the same people who claim to be arm in arm with the movement.”While there are present stigmas against modified bodies, there are also stigmas against those that are not, within the trans community, specifically. The stigma that there is only one way to be trans is a stigma that needs to end. Trans people and members of the LGBTQIA+ community are valid, no matter what they choose to do with their body.  Members of this community are not all thin, white people with colored hair. It’s important that the body positivity movement showcases that.

The media (tiredly) perpetuates the ideal figure for men: broad, chiseled and always drowned in oil. Six-packs, followed with the overglorified V-line, these features leave men reaching for “perfection” – no matter the stakes. Young-White reveals the lengths he went to achieve the ideal figure: “Last year, I absolutely hated my body; I had an extremely frail frame with lanky arms and a ‘bird chest.’ I ended up spending an entire summer working out and over-eating to chase that desired bulky/chiseled male body you see being glorified in every form of media.” In the United States, 10 million men suffer from clinically significant eating disorders. Through the constant perpetuation of these toxic ideals, a rising number of men are now suffering from these disorders, which can ultimately lead to death. “I was almost ashamed that I became so consumed by other people’s constructed standards. If I could go back in time, I wouldn’t have changed at all. I now have large stretch marks on various parts of my body to remind me of it. ”

While the faces of the movement claim to represent all shapes and sizes, they only really represent the average man and woman. Dunn and co-author Deborah Christel—both faculty in the department of apparel merchandising, design and textiles at Washington State University—found that the average size of the American woman now falls between a 16 and an 18, the lower end of plus sizes. As we’re faced with Iskra Lawrence’s and Meghan Trainor’s, it’s essential to remember that they do not represent the majority. Lawrence is a size 14, the average size in the U.K. and Trainor is a size 12, less than the average size in the U.S. granted while it is significant to have people who do not have the typical model figure, it is extremely significant to have people who go well over that figure and over the average size. The body positivity movement should not be glorifying average size women but instead, women who go beyond that.

The Importance of Accurate Representation

“You can’t expect everyone to be down with the cause if you’re leaving people out.” – Matthew Robinson

“Representation is very important. Diversity needs to be included in body positivity because we are lacking diversity and representation helps achieve that. To show people beauty isnt strictly the definition society expects you to be. Beauty should be defined differently by each person.” – Eduardo Morales

To all who struggle with representation:

“Keep being who you are. The body positivity movement is still controlled by Western media and Western views of conventional beauty have been attached to it, and if youre changing yourself for the purpose of fitting into this narrow view of beauty, the movement will continue to showcase these Western views.” – Gale Gersten de Montelongo

“With representation, sometimes people have to be pioneers. You showing you love yourself will encourage others like yourself to tread on the same journey…Don’t allow other people’s views on the perfect body defer you from accepting your own.” – Matthew Robinson

“Stop comparing yourself to other people. You can only see what people want you to see, so it makes no sense to drive yourself mad over what could be purposely censored or edited…Secondly, definitely practice being comfortable in your own skin…Thirdly, create your own groove.” – Javaughn Young-White

Body Positivity is a movement meant to shine on all but too often, shines on only white, cishet, able women, women that are also conventionally attractive and maintain an ordinary physique. As the movement continued to garner attention, it is imperative that we widen our scope of beauty to include people of color, people with disabilities, LGBTQIA+ people, fat people and unconventionally attractive people. The movement aims at deconstructing our beauty standards, regarding our bodies–attempting to eliminate the myth that thin is synonymous with attractive. If you need any more proof, check out the cuties below:

Keep Your Taxes Off My Uterus! 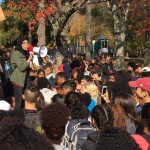 Noor Alsulaihat - an Arab-American Muslim woman, who proudly dons the hijab - is passionate about civil rights and championing equal opportunities for all. As a high school senior, living in Silver Spring, Maryland, she maintains active in political endeavors, eager to make a difference. When she’s not protesting in the streets, you can find her at your local thrift store (or on Twitter @yafavterrorist!)