Everyone has been talking about ‘Moonlight’. And rightfully so. Watching ‘Moonlight’ was an overwhelming experience for me, to say the least. Jenkins and McCraney’s film, based on the unpublished play ‘In Moonlight Black Boys Look Blue’, takes you into the life of Chiron, a young black man growing up in Miami. Presented in the form of 3 chapters, evocative of 3 shorts or acts, titled ‘i. Little’, ‘ii. Chiron’ and ‘iii. Black’, taking us from one key stage of his life to the next.

‘Moonlight’ struck me as the product of delicate and intricate crafting. From the recurring motifs of saturation and the fluent character continuity from chapter to chapter, to the powerful performance of the actors playing Chiron over the years despite having next to no dialogue, it radiates a coherent and magical essence. The film brought so much to the table that it would be impossible for me to even dip into everything, but amongst the various powerful themes that struck me was the notion of toxic masculinity.

Chiron experiences a lot of bullying and harassment throughout the film; from being isolated for his size and given the nickname ‘Little’ to being targeted for behaving differently. His character allows the film to reveal the raw brutality of masculine expectations when it comes to appearance and demeanor. You’re not allowed to express an ounce of emotion or rejection towards the aggressive or violent activities the other boys are into, and this level of repression along with the robbed innocence he experiences at home leaves him with nowhere to turn.

At some point, you gotta decide for yourself who you’re gonna be. Can’t let nobody make that decision for you.

This film is packed with scenes that will make your heart ache and your fists clench. Watching Kevin, Chiron’s closest thing to a companion, assault him after the bully Jenkins instructs him to because he knew his manhood would be questioned otherwise is one of the biggest indicators of the toxicity of ideas of masculinity. The way Kevin felt obliged to put his feelings aside in order to prove himself and avoid being treated in the same way he has witnessed Chiron get treated over the years is painful to watch. Especially as he begs him to “stay down” in order to not have to hit him again.

Making matters worse, the lack of a support system is highlighted in the conversation Chiron has with a faculty member in the office after the incident as she says, “if he were a man,” he’d tell her who did it. This pattern of schools and institutions not grasping how to handle a situation like this is beyond my comprehension and gives me the impression that they do not care enough to take into consideration the dynamics they’ve all experienced firsthand in their school years. However, this successfully portrays how helpless Chiron feels throughout his adolescence, as he heaves, “You don’t even know me.”

You know, some people say to me ‘Moonlight is so great, it is going to change things’, and I think it is maybe helping a few people to find answers to some things. But the attitudes and problems it portrays are not historic ones, they are here and now.

This dissonance individuals experience at very fragile and volatile times of their lives are not constricted to age ranges or identity, it’s a global experience, but the toxic notion of masculinity has added a dangerous dimension. In ‘Moonlight’ this is in the context of sexuality and acceptance from a community, but first and foremost, from yourself, however this manifests itself within all contexts and communities. And the sad but crucial, and oftentimes hopeful, thing is, if identified and repaired could spare many individuals’ lives, in all senses of the word.

White is Not The Default For LGBT Representation 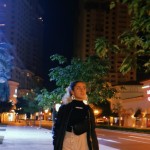