Harley Quinn And The Joker’s Relationship Is Actually Trash Promotion for Suicide Squad began almost a whole year before its theater debut and the movie has slowly gained social media momentum up until its release. While most of the focus was on Jared Leto’s unconventional method acting quirks, such as giving the entire cast a dead pig, passing out used condoms, and gifting Margot Robbie with a live rat (she said she kept it because Harley would have adored any gift from The Joker), or on Harley’s hyper-sexualized wardrobe, some of it has shifted towards the abusive relationship between the two of them. It seems the internet has been divided on whether or not this relationship is truly toxic. Memes have surfaced on either side, depicting the two as being #goals or as being a recipe for disaster. I want to settle this once and for all and provide you with instances from the comics, and my own personal experiences.

Harley Quinn is point-blank being abused by The Joker. 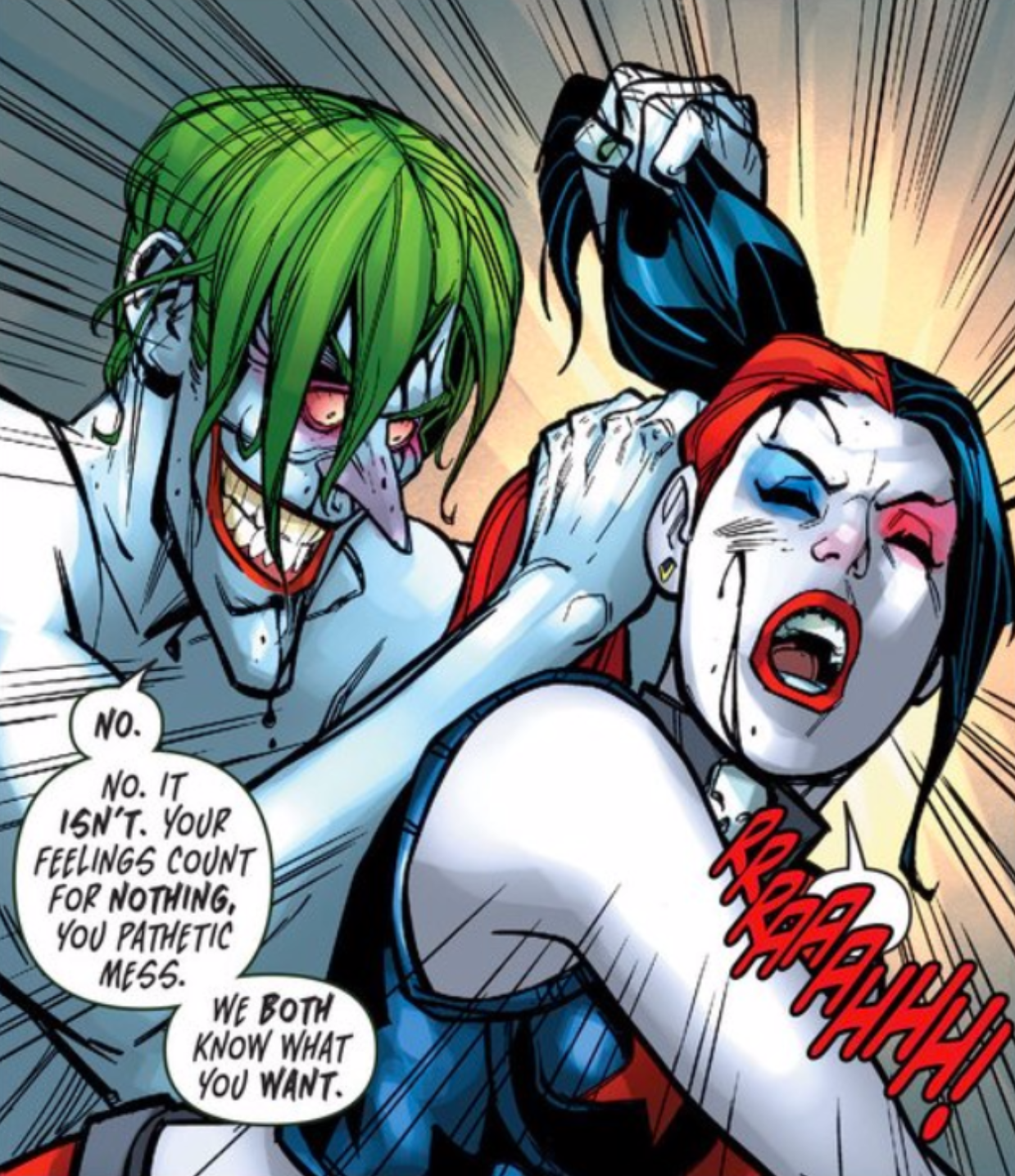 The comics make this absolutely clear. Even from the start of their relationship there was a clear power struggle and a dominance upheld by The Joker.

From The DC Database: Realizing his intention, she had struggled, but he shoved her into one of the chemical vats and watched her sink to the bottom. Afterwards, he drained it and found her inside, alive, but changed. She had lost touch with reality, which meant that she could do whatever she liked. He dubbed her Harley Quinn, and the two of them were together – until he tired of her.[4]

Their relationship wasn’t cute or fluffy by any means. From the time they met in Arkham Asylum until she broke him out, he had emotionally manipulated her and had ignored her personal wishes. Although the relationship is difficult, it has its good moments- up until The Joker leaves her.

Once Harley was captured and put on death row for the crimes she committed for or because of The Joker, she was inducted into the Suicide Squad (for those who don’t know, the squad is an assembly of captured criminals who are forced to complete missions to help save people and if they fail, they die) and had a fling with Deadshot. In the meantime, Harley heard a rumor that The Joker was dead and escaped prison to find out if it was true. Upon confirming his death, the Squad attends his funeral and The Joker rises, alive and well. He learns of Harley’s “misconduct” with Deadshot, claims she has changed and completes a list of vengeful, abusive attacks on her. He threatens to cut off her face, chokes her into unconsciousness with a chain, sics her own Hyenas on her, forcing her to slit her own wrists and kill the hyenas to survive, and burns down her apartment.

When Harley was The Joker’s doctor in Arkham Asylum, they had many deep and meaningful conversations, one which includes her father’s death and The Joker showing her the finger of the man who killed him. Because of these conversations, Harley develops a bond to The Joker and even romantic feelings even though it is inappropriate in a patient/doctor setting. Many people think that Harley is a victim of Stockholm Syndrome but since the bond and attraction was already there beforehand, Stockholm’s doesn’t make sense. Instead the cycle of abuse and affection she experiences in the relationship is something known as Traumatic Bonding. Since The Joker never kidnapped her or held her as a hostage, Harley never experienced a true Stockholm episode.

Trauma bonding, a term developed by Patrick Carnes, is the misuse of fear, excitement, sexual feelings, and sexual physiology to entangle another person.

Additionally, the intensity of this bond is what makes it so hard for the victim (Harley) to leave the relationship, no matter how clear the signs of abuse may be to them.

Abuse and Relationships Organization describes it as such:

Intense relationships also tend to hijack all of a survivor’s relating capacity. It is like a state of being burnt out. First, while it is very easy to become attached to a very chaotic and inconsistent person, it is simply not possible to form a consistent internal object representation (feeling memory) about them. When separated from the intense partner, the urge to make contact is usually intense because it is a stable feeling memory (or internal object) that makes separation from an important other person intolerable in any circumstance. Second. the survivor can come to find that it can be almost impossible to relate to anyone, even family or old friends, except superficially. There is a biological craving for intensity that no normal relationship will satisfy. This provides a feeling of being totally alone, and totally empty. At first, only going back to the primary aggressor can overcome it. It would be normal in this state to believe that something is horribly wrong with leaving (even if it seems equally true that something is horribly wrong with staying.

I experienced the same phenomenon for the past five years as a result of  a traumatic bond to someone I’ve known for a really long time. Because they comforted me at a particularly heartbreaking time in my life, I naturally latched onto this person and let the friendship continue to grow. I endured years of an affectionate/unaffectionate relationship because of a strong bond that I couldn’t find in my heart to break. This person would abandon me and then come back to me, sexually excite and frustrate me, ignore my rejections or pleas to stop their advances, and give me vague, unclear answers as to what their true intentions were towards me. When I would tell other people about what was going on or ask for advice on the situation, most of them would recoil in shock. They would ask me why I was still in contact with this person. Much like Harley, I couldn’t understand why people saw the relationship as a threat to my well-being. I would even argue, at times, that the intense cycles of being hurt and being healed by this person felt good to me or that it was what made the relationship “special.” I would struggle to find anything genuinely wrong with the situation, I’d make excuses and shrug it off.  I’d say: “That’s just how we are with each other. It’s completely normal.”

Even though it’s clear to me now that nothing about that relationship was healthy or something that I should’ve tried to rationalize, I still struggle with the effects of being romantically involved with someone who liked to fight with me. It’s difficult for me to understand how low intensity relationships work. It’s sometimes difficult for me to be emotionally intrigued by romantic relationships that are calm and stable, even though I cognitively know that it should be a natural instinct for me to want safety instead of danger.

In short, there is nothing that is goals about Harley’s relationship with The Joker. The type of romance that they had was not intended for people to talk about wanting. The shippers who think that it’s acceptable just because they did have moments of deep affection need to understand what I had to a long time ago: Affection doesn’t erase aggression, especially if the affection is almost always immediately followed by aggression. Cycles of abuse shouldn’t be romanticized because a degree of love was involved and we certainly shouldn’t give this relationship a pass just because it’s on the big screen.

Sidenote: Why don’t we invest our memes into something more positive? Harley and Ivy are officially dating, the relationship is stable, and it’s solid representation for the LGBT community!

Author
Kaliane
Kaliane is a twenty year old girl who lives in a small town in Arizona. She enjoys writing articles about mainstream media and challenging them on their sexism, lack of representation, or racism. She also enjoys swimming, walking her dog, writing poems, and whipping up baked goods. Her favorite color is yellow and her favorite musical artists are Lorde, All Time Low, Fifth Harmony, Demi Lovato, and Alanis Morissette. She enjoys binge watching both Girl Meets World and Boy Meets World. You can find her on twitter @MoonriseKaliane!

The Top 5 Cities to Visit in Washington State

The State of Washington is, as well as obviously being the central hub for the United States political…
byAffinity Magazine Staff

How to Establish Yourself as a Thought Leader

Whatever your particular area of interest, there are probably a few you look to when you want some…
byAffinity Magazine Staff