Beginning November 8, 2018, from Sierra Nevada foothills to being contained on November 25, 2018, the most expensive and worst natural disaster happened in America. Called the Camp Fire after the region it devastated, it left behind a wreckage of 14,000 homes destroyed, 85 people killed, and at least 296 people missing. 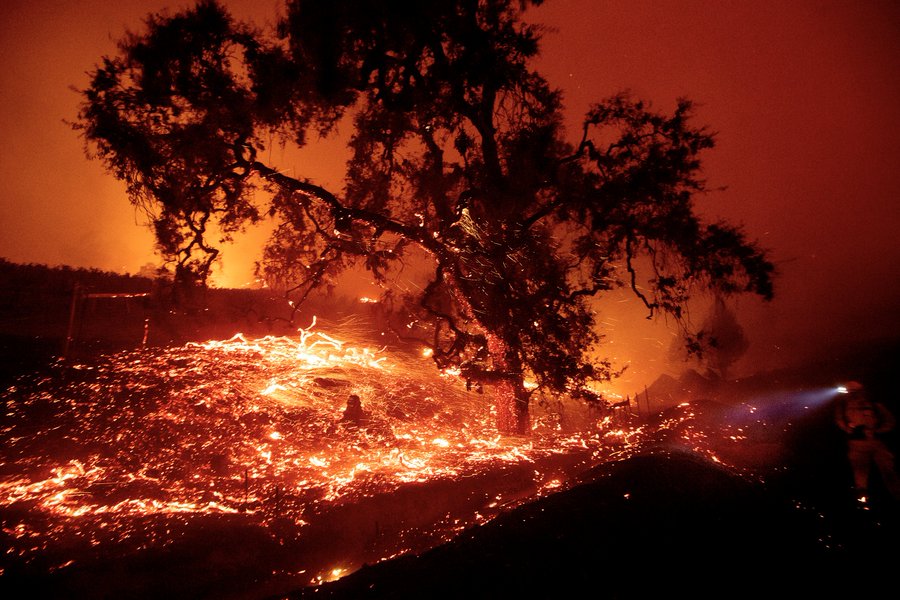 The fire spread quickly due to high temperatures, wind, and vegetation. President Trump blamed the forest management of California and threatened to reduce federal aid while state officials blamed global warming and pointed out that more federal forest land has burned than state forest land. This tension between the federal and state government was based on the two parties wanting to find someone clearly responsible for the fires. Only recently has a guilty party been identified, but it is not any form of government that has been deemed responsible.

According to California Fire, PG&E was the one responsible for starting the fire. Electric lines owned and operated by PG&E were finally admitted by the company and identified by the local department as the source of the fire.  This admission occurred after the company was investigated in 2018 for misleading gas reports that went against pipeline safety rules.

From the 2018 investigation to the intense scrutiny of the company in its involvement with the California fires, PG&E has had difficulties with maintaining a clean image after all the news and public mistrust on the company’s past mishandling. In 2019, PG&E filed for bankruptcy after it faced billions of dollars in claims related to wildfire claims.

The company has had to keep spending money to stay afloat, however. Through the plea the company submitted Monday, the organization was given a fine no more than $3,486,950 and had to reimburse the Butte County District Attorney’s Office $500,000 due to their investigation on the wildfires.

Despite all this money being spent by the company relative to its bankruptcy a year before, people were not pleased with how this company’s latest mishandling in a natural disaster This settlement has caused an uproar, with online users equating the fine to the number of people who were killed during this fire and what the cost of a human life means to the state of California.

According to PGE, each one of those lives is worth less than 42k.

That's how much your life is worth. Less than some people make in a year. Less than Bezos makes in 20 seconds.

The utility company tried to suggest otherwise with the creation of aid to help survivors and the thousands of people who are currently homeless. PG&E has agreed to the following plea, not looking to appeal. PG&E also must establish a $13.5 billion trust to the victims of the Camp Fire and hundreds of millions to the town of Paradise and Butte County, along with assisting the prosecution’s investigation of this case.

Its criminal punishment:
*No jail time
*A fine up to $3.5 million. It makes $3.7M every two hourshttps://t.co/JLy3iRIwNm

Ye, many believe that 84 lives lost cannot be replaced by a $3.5 million fine and that some of the executives of the organization need to be jailed. The San Francisco Chronicle noted that this is the second time that the company has been criminally convicted, reminding readers of the 2010 San Bruno gas explosion that killed 8 people and destroyed 38 homes. This makes the company “among the most criminally convicted companies in the U.S., at least in terms of fatal injuries“, the San Francisco Chronicle said.

As news of this plea emerged, PG&E may have believed that the right outcome has been reached. Victims and survivors of the fire will be compensated, the company will work with the prosecution, and the company will continue business like usual. However, people affected by the fire and Americans who feel for those affected are not pleased. There may not be an appeal, there may not be any consequences for the company, but there is an agitation among Americans.

Author
Mia Boccher
I want to share my words and take in other's.

While the US is known worldwide for its “big five” sports, it’s a surprisingly insular place as far…
byAffinity Magazine Staff

Why sports still holds a special place in theaters

The theatre is the grand stage where you can witness true artistic greatness. Whether you wish to watch…
byAffinity Magazine Staff

How To Deal With Deep Cuts And Wounds

Dealing with deep cuts and wounds can be a daunting experience. Thus, it’s important to stay calm and…
byAffinity Magazine Staff