On Friday, the 3rd of January, the streets of almost every city of Iran witnessed floods of rage-filled people protesting and chanting slogans at the top of their lungs, the reason being the huge shock that they received at the dawn of the same day: the brutal assassination of none other than the Iranian national hero, General Qasem Soleimani.

“Their (America’s) celebration is short-lived,” said a woman participant of the protests in Tehran as recorded by Channel 2. “The day that we pray in Masjid al-Aqsa (Jerusalem), that day the blood of Qasem Soleimani will have been avenged.”

Angry protesters filled up the streets of Tehran, Khorasan and Kerman among other provinces, with posters of Soleimani and chants of “revenge, revenge!”

“He (Soleimani) is alive. He remains with us in our hearts,” said another woman, with eyes full of tears. Memorials and candles were placed in almost every shop and every alley of Tehran, and a three-day public mourning was declared throughout the country.

Martyr Lieutenant General Qasem #Soleimani joined his martyr brothers. However, we will take a very hard revenge from USA#iran https://t.co/3QDjiHEdSg

In what was said to be a retaliation for the attack on the US embassy in Baghdad, airstrikes were launched by the US army on the direct orders of President Donald Trump, targeting the IRGC Head Qasem Soleimani and Abu Mahdi al-Muhandis, the second-in-command of Iraq’s Popular Mobilization Unit (PMU) among six others. It must be noticed that Tehran had denied any responsibilities of the attack on the embassy, with the Supreme Leader Grand Ayatollah Syed Ali Khamenei calling it a result of American crimes in Iraq. The Supreme Leader’s statement was backed up by a video of the Iraqi people shouting slogans outside of the US embassy. “Allah is Great, US is the Great Satan!” shouted a group of Iraqi civilians outside the embassy, before it was set ablaze.

Iraqi *civilians* chanting “God is great, America is great Satan!” right outside the US embassy before setting it on fire. If the US officials still think this attack was orchestrated in Tehran, their foolishness is worth laughing at. #Iran #IraqEmbassyAttack #WWIII #worldwar3 pic.twitter.com/30EzEeaDMR

As soon as the news of the attack spread on the internet, angry Iranians took to Twitter, calling for revenge. “Order coffins for your soldiers,” commented an Iranian user under Donald Trump’s latest tweet. “Light it on … fire,” retweeted Hoda Katebi, an Iranian-American activist in response to the American flag tweeted by Donald Trump as the news of the assassination broke. “I have no words,” she said, fearing an uncontainable war in the region. However, it was not only Iranian users who were disgusted by this authoritarian decision taken by the US President. “When are your children enlisting in the army?” commented an American user, as fears of loss of American troops and immense damage arised with the Iranian spirit of revenge. 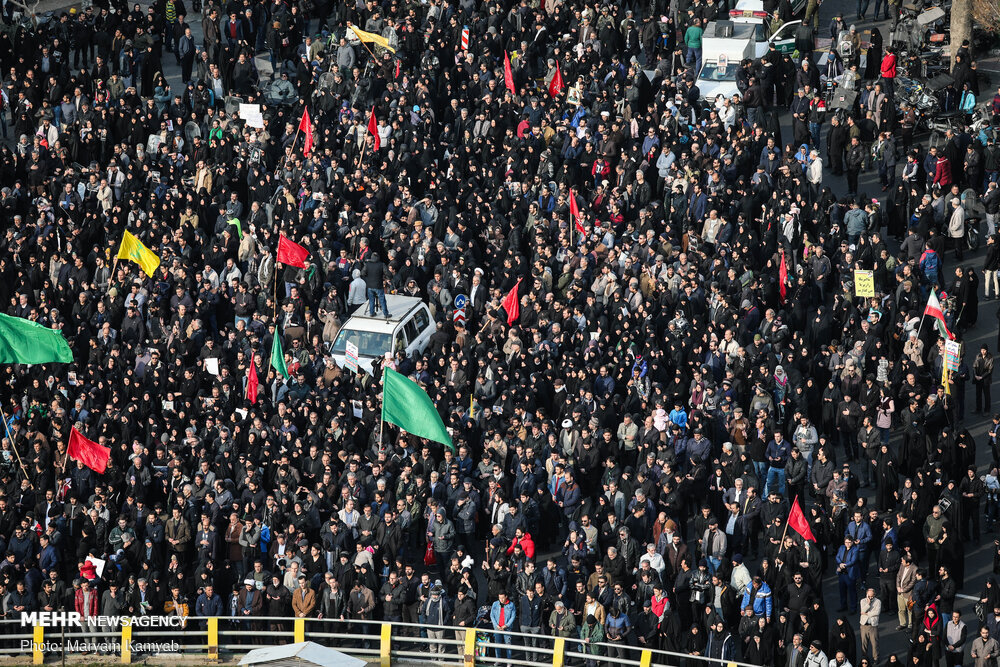 To the Iranians, general Soleimani was not just the head of the IRGC, but also the man who was in the forefront fighting off the deadly ISIS. To the Iranians, it meant that he was the one who re-opened the gates of Syria and Iraq for the Shi’a Muslims for pilgrimage to the holy shrines situated in these countries.

With the advent of ISIS and Muslim fears of demolition of religious sites in the two countries, the IRGC was officially invited to help retake control. Since then, over a period of almost six years, the threat of ISIS was diminished to nothing – Soleimani being on the frontline in this. Therefore, he became the only recipient of the Islamic Republic of Iran’s highest military honor, the Order of Zolfaghar for his chivalry in the battlefield against the ISIS.

An Iranian protestor holding up a sign saying: “May the tongue of the one who speaks of negotiations with America after this become mute!”

The Iranian nation is bursting with rage at the heinous assassination of their national hero, #QassemSoleimani. #WWIII #Iran pic.twitter.com/72QU7uzuRt

From the looks of it, any possibility of a peaceful negotiation between the US and Iran has eroded away. The aftermath of the General’s murder could mean anything from war to destruction, but exactly how much destruction it will bring, only time will reveal.

Huda is an avid reader, writer and illustrator. She writes about politics, books, Muslim women and shares most of her work on her Instagram.