Zulaikha Patel’s Afro Revolution And Why It Matters 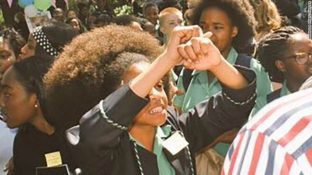 Zulaikha Patel is a student at Pretoria Girls High School in South Africa who’s fighting for her right to have a fair education. The school, which previously only accepted white students under apartheid, maintains discriminative policies, such as those restricting student appearance, towards its black students. Her school’s policy currently prevents her from having the fair and unbiased education she deserves, and she’s decided to take a stand against the unfair policy mandating that she straighten her “messy” hair.

Having struggled with the oppression of her natural appearance for years, this young girl’s struggle for acceptance and equality has spread via a video that went viral across several media platforms. The school itself has not made any comments as of yet, but it has been noted teachers have attempted to quell the student’s protests through keeping them inside the school and verbally reprimanding them. Additionally, armed guards were placed at the site of the protest, despite the protest being entirely peaceful. Through her struggle, Patel delivers an important, and often forgotten, message: the fight for equality is not over, and racism is still present around the world, even in small areas such as a school policy.

Hopefully through her actions and the support of many others, Pretoria Girls High School will permanently change their outdated policies, and other schools with similar policies will follow suit. Until then, Patel will continue to fight against oppression and inequality in her school and across South Africa. From the brave struggle of this young girl, we gain the message that students should not be forced to conform in order to receive a fair and equal education.

Author
Tiffany Amber
Tiffany is a blogger, writer, and avid tea-drinker. She watches Friends reruns relentlessly and has a passion for both animal and human rights. For enquiries and writing opportunities, contact her at tiffany.dingley@gmail.com

The Humanitarian Crisis in Artsakh: Azerbaijan Continues a Reign of Violence

Within some of the world’s most desolate and loosely defined borders, people live in the crosshairs of one…
bySeamus Bozeman

Social Responsibilities of Gaming Houses and Establishments in Canada

TW: This article contains information regarding violence, torture, death and assault. Canada has long skirted around its treatment…
byHelen Ehrlich

From Friends to Foes: What Does the Future Hold for the SNP Amid the Salmond-Sturgeon Clash?