Superhero Movies Are Only For And About White Men, And It Sucks

It’s no secret that Hollywood movies feature almost exclusively white male characters as their leads, and unfortunately, superhero movies are no exception. Most of them have white male main characters, and there’s hardly any diversity in the cast, whether it’s racial, LGBT+ or female representation. For the fans, it’s very frustrating, because many comic book readers are people of color, girls or part of the LGBT+ community (or all of the above), and they would like to be represented in their favorite movies. But unfortunately, DC Comics and Marvel apparently couldn’t care less about this part of their readers, because they keep doing the same problematic things in all of their movies. Suicide Squad, DC’s new movie, just came out and it is a prime example of how comic book companies only care about their white male readers.

Let’s start by a very important topic in both superhero movies and comic books in general : the sexualization of women. It is a known fact that a lot of comic book artists have no idea how to portray women. They keep drawing them with unrealistic bodies : a very tiny waist but large hips, unrealistic breasts, as well as very uncomfortable-looking suits and high heels (who even fights and jumps off buildings in heels ?). In movies, women are just as badly portrayed, and we get a good example of that with Harley Quinn in Suicide Squad. It seems like the people at Warner Bros. and DC are actually preteens, considering that the movie literally had a scene where Harley changes in front of everyone, with shots of her in her underwear. This is something that Harley’s character would probably do, but this scene was clearly intended for the male audience of the movie. And to a lot of fans, it came off as a bad joke. Harley’s suit could also have been a lot better. Harley Quinn is known for her many different suits in the comics, and all of them are so much better than the cheap-looking costume that she had in the movie. DC had so much potential for Harley’s clothes, yet they decided to sexualise her again and dress her up in high heels, stockings and incredibly tiny shorts.

Another problem in superhero movies is the glorification of abusive relationships. I won’t talk about Harley and Joker’s relationship too much, as many people have already analyzed it in detail. However, this relationship is still a huge problem in Suicide Squad, because many people who have seen the movie now think it’s “cute” and “intense”. Many Harley Quinn fans were counting on this movie to portray Harley’s abuse, and were hoping that DC would show how much the Joker was toxic and violent to her. Unfortunately, they let us down once again, and people who have never read comics now think that Harley and the Joker have nothing but a passionate romantic relationship. Thank you, DC.

Some of the jokes in this movie were also borderline outrageous. At one point, a male character punches a female character out of nowhere and just says “she had a mouth”. And the worst part is, most people in the theater laughed. Same thing happened when Batman punched Harley Quinn and then gave her weird, sexual CPR. I just don’t understand how a movie with huge promotion and budget like Suicide Squad thinks it’s okay to make jokes like this. Jokes about men punching women aren’t funny, they’re simply disgusting.

And finally, just like all Hollywood movies, people of color don’t have lead roles. In Suicide Squad, most leads are white except for Will Smith’s Deadshot. I know this movie has a lot of main characters, but I feel like some characters had a lot of potential, yet DC let it go to waste – again. For example, Katana has like two lines despite being one of the most interesting characters, whilst Captain Boomerang has a lot more screentime even though he’s way less interesting. Katana is an amazing example of a badass female character, and there are only a few Asian superheroes in movies so far. Earlier this year, X-Men : Apocalypse introduced Olivia Munn’s Psylocke, an awesome Asian female mutant, and the same thing happened. She had almost no screentime, no lines and was always in the background.

Another disappointing point about Suicide Squad is Viola Davis’ character, Amanda Waller. A lot of fans were eager to see what DC would do with this character, and considering the promotion, she was supposed to be a lead role. Unfortunately, we were let down again. In the movie, Waller is only here for the narration and plot convenience. She is only here to introduce the members of the squad and start their mission. Despite being very interesting, her character doesn’t have any depth, even though she’s supposed to be a lead. We don’t learn anything about her, and she doesn’t even have many lines. A bit strange for a main character, right ?

In conclusion, Suicide Squad is another example of how the target audience for superhero movies is solely straight white men. Just like Deadpool, Captain America : Civil War and all the superhero movies that came out in 2016, it is filled with white male characters, sexualises women and makes poorly written jokes. As a superhero fan, I am sick of being let down by all the superhero movies I watch, and I know I’m not the only one who is angry. So get a grip, Marvel and DC. Your fans aren’t only straight white men : start including the rest of your readers in your movies.

Michael Phelps: The Importance of His Recovery and Return to the Olympics 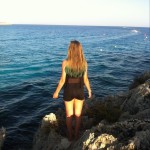 Lucile Marie is a 18 year old girl who studies film and television in York, UK. Most of her articles focus on the LGBT+ community, mental health and feminism. She is interested in a lot of things, including cinema, veganism, comic books, poetry and writing. Find her on Twitter : @gothamgrrls !