Why I Deleted Snapchat

A month ago, I decided I would delete Snapchat from my phone. This may seem rather drastic for a person aged 17 in a social-media generation, but I assure you my reasoning and benefits I have gained may even convince you that, in fact, we are not as reliant on social media as we may think.

It all began during one of my stress breakdowns: I was trying to find the root cause of the problem of my stress and to add to the issue, my Snapchat notifications were simply increasing my stress levels.  The initial resolver would have been “turn off your notifications” but it was not that simple. After thinking about what feelings and emotions I attached to Snapchat, the main contenders were anticipation, disappointment and annoyance.

My anticipation would be the sending of a message, the watching the time it was sent and waiting for it to be opened, I was looking for the gratification of having a reply, for the person on the receiving end to read my message and have the motivation to respond. It may sound rather over-exaggerated, that it does not require the person to be completely focused on replying to reply. It was all well and good when the person responded. The problems arose when the red or blue arrow that was placed beside their name opened. It remained opened. The worst part of Snapchat is that it tells you underneath their name, how long ago it was opened. You start to count the minutes and suddenly each minute has an association with how much the person cares for you. Suddenly the person comes into question. Why didn’t they reply? Do they not like me? Do they not want to talk to me? Are they just busy or did they purposely not reply? Perhaps to the average person, these questions do not arise but for the amount of reliance I placed upon Snapchat to contact my friends outside of the real world was ridiculous.

Don’t get me wrong, Snapchat had its advantages. For example, it made video sharing so much quicker, I no longer had to merely describe what I was doing, I could show what I was doing. I could send funny videos to my friends and throughout this communication experience. But the screnshoting of my bad selfies was not secret, I would instantly get a notification that told me who did it. It was almost safe, I was aware of who had the photo forever and who just looked at it for 5 seconds and responded with an equally bad photo. There was such a high element of trust that lay between me and my friends, we knew not to screenshot or take any of it seriously.

Snapchat was something that I considered fun. That was until the introduction of snap streaks. I will admit, at first, the challenge was fun, it’s a good game: see how many days you can get in a row. The highest streak I ever reached was with my best friend, at around 550 days. The problem I found with “streaks” is that it became a part of my routine and habit. Snapchat was no longer something I would do whenever I wanted to. I put no shame on my friends for this, everyone copied everyone, there is no one to blame for this.

Every single morning, I would wake up with around 10 single messages that said “streak” or some variation of it. Messaging my friends became a chore in the morning. I even tried to adjust the way I kept the snap streaks. I would send “good morning” or “have a nice day” instead of the monotonous “streaks” in an attempt to break the habit of every single one of the friends I had a “streak” with. Consequentially, this did not work.

You may ask: why did you not just end the streaks? Here is the problem. The snap streak became a symbol of friendship for most people, you would have a snap-streak with all your close friends. It sounds so ridiculous, but because people placed such high value on something they could only control half of, people would be annoyed if the streak broke.

Therefore, I was often keeping the streaks to keep my friendships. It became a stress, a hassle, and a chore.

I mustn’t fail to mention the few more features that Snapchat felt they needed to “improve” their application: stories and the discover page. It may seem like I placed big values on things I couldn’t control and I couldn’t agree more. My personal priorities and mindless habits became self-destructing. I would open Snapchat, I would check to see if I had messages, but my habits led me to not simply close the app. I would swipe left to the stories page and click on the things everyone was doing; this was not a problem until parties and social events. Before Snapchat stories, I would be minding my own business, not caring about what everyone else is doing. Stories meant that even if I didn’t go to an event, I would still see what happened. I would see what I was missing out on or the “highlighted” sections of the events. This, for me, was self-destructing.

Something I really disliked about this feature was that I couldn’t mute people’s stories. I couldn’t put a block on the things I didn’t want to see one evening, it was there staring me in the face. The discover page slowly improved as time went on, due to the fact I could mute magazines and news sources I didn’t want to read. However, Snapchat placed some “important events” stories onto that page and I couldn’t mute them. This only led to me mindlessly clicking on them and before I knew it I would be watching the events of other people, yet again.

Snapchat’s most recent update, SnapMaps, really pushed it to the edge for me. I saw no benefit in SnapMaps whatsoever. They promoted it as a “social event creator” but for me, living in an area and being at an age where going out only really involves an invite, SnapMaps became merely a stalking tool. Not only would I see the stories of people’s days but I would be able to see their location to prove that they were anywhere else but home. I could sit in my house and see that people were doing stuff outside, socializing, I could see who was together. The worst part of SnapMaps is that you could see when people were online or when they were last online. This added a whole new dimension to the messages dilemma. I could send someone a message and see that they were online but not opening the message. My overthinking would lead to wondering if people actually wanted to talk to me or if they were messaging me for the sake of fulfilling their boredom. I would message people who weren’t only my close friends and suddenly I felt that a lot of people were relying on me to balance the friendships. I couldn’t keep up with everyone and it became so overwhelming. My life suddenly became something that everyone knew. You may argue that I had the choice to share my location and the choice to share stories, but the fact that I would see others doing exciting things meant that when I was doing something excited I felt obligated to share it.

I eventually came to the conclusion that Snapchat was not healthy for me. I am a big over-thinker and I was not helping myself by providing myself with evidence for my large assumptions of people’s opinions. The only problem I had with deleting Snapchat was the large amounts of photos I had stored in the memories section of the app. So I spent a long time downloading all the photos I wanted to keep or had not already saved previously before I deleted it. I sent out a message informing everyone that if they wanted to contact me, they should text me and I haven’t looked back since. The first day of not using it was difficult but I soon came to adjust to using iMessage to contact my friends and I found that I was focusing my time only on the friends I truly cared about. I was not wasting my time looking at what people were doing or aimlessly reading discover page articles that were a complete waste of my time. The social media I use the most is Instagram and I have in fact muted most people’s stories on there so I have a filtered version of stories, where I can see only what I have chosen to see. I have begun to spend my time on things that I actually care about, like writing articles, making art and reading. I have even started to learn how to DJ. At events, I no longer feel the need to make a record of everything. I live in the moment more, I focus less on my phone and I use fewer data. The time I do spend on my phone is valuable.

I would suggest you try out a Snapchat detox of your own. Even if you only delete it for a day or for a week, you may start to realize that in fact, your life does not revolve around your phone. It is much more exciting and mysterious to not share your everyday moments, you will have more to talk about. Real life conversations will become more meaningful and your productivity levels will increase massively. Try something different and break from the habit of social media, try living a full day without sharing it. Spend a day truly with yourself and not half with the people through your phone. You may be surprised how great it feels.

You Suck at Breaking Bad Habits, But It’s Not Your Fault 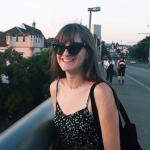 17-year-old writer who enjoys talking about passionate subjects and issues that really matter in our world. Indie music and concerts take over the majority of her time - as well as A-levels.